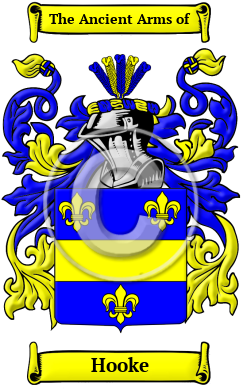 The present generation of the Hooke family is only the most recent to bear a name that dates back to the ancient Anglo-Saxon culture of Britain. Their name comes from having lived in Dorset at Hooke, a parish, in the union of Beaminster, hundred of Eggerton, Bridport division. Hooke is also a chapelry, in the parish of Snaith, union of Goole, Lower division of the wapentake of Osgoldcross in the West Ridig of Yorkshire and Hook is a hamlet, in the parish and union of Kingston-Upon-Thames, First division of the hundred of Kingston in Surrey. [1]

Early Origins of the Hooke family

The surname Hooke was first found in Devon where one of the first records of the name was found in 1050-71 in a reference of Old English Bynames of Devon. Later in the Assize Rolls of Lincolnshire, the Latin form of the name, Hervicus and Richard Hoc were listed in 1218. By 1230, the Pipe Rolls of Berkshire had listed John Hook, the first listing of the name as it is more commonly spelt today. [4]

Early History of the Hooke family

Until the dictionary, an invention of only the last few hundred years, the English language lacked any comprehensive system of spelling rules. Consequently, spelling variations in names are frequently found in early Anglo-Saxon and later Anglo-Norman documents. One person's name was often spelled several different ways over a lifetime. The recorded variations of Hooke include Hook, Hooke, Hoke and others.

Notables of this surname at this time include: Reverend Thomas Huyck DCL (died 1575), Chancellor of the Diocese of London; Sir Richard Hook of Scotland; and Humphrey Hooke (1580-1658), a Member of Parliament for Bristol (1640-1642), who supported the Royalist cause in the English Civil War. William Hook (1600-1677), was a Puritan divine, "said to have been born of respectable parents in Hampshire in 1600; perhaps he was one of the Hooks of Bramshott in that county. He became commoner of Trinity College, Oxford, in 1618, and graduated B.A. in 1620." [8] Robert Hooke, FRS (1635-1703), was an English natural...
Another 97 words (7 lines of text) are included under the topic Early Hooke Notables in all our PDF Extended History products and printed products wherever possible.

Migration of the Hooke family to Ireland

Some of the Hooke family moved to Ireland, but this topic is not covered in this excerpt.
Another 182 words (13 lines of text) about their life in Ireland is included in all our PDF Extended History products and printed products wherever possible.

Hooke migration to the United States +

Thousands of English families boarded ships sailing to the New World in the hope of escaping the unrest found in England at this time. Although the search for opportunity and freedom from persecution abroad took the lives of many because of the cramped conditions and unsanitary nature of the vessels, the opportunity perceived in the growing colonies of North America beckoned. Many of the settlers who survived the journey went on to make important contributions to the transplanted cultures of their adopted countries. The Hooke were among these contributors, for they have been located in early North American records:

Hooke Settlers in United States in the 17th Century

Hooke Settlers in United States in the 18th Century

Hooke Settlers in New Zealand in the 19th Century