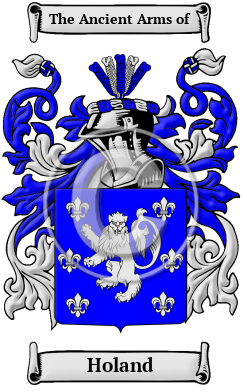 The Anglo-Saxon name Holand comes from when the family resided in an enclosed region. The surname Holand originally derived from the Old English word hough which referred to a small protected space. [1]

We enclose this quotation in its entirety: "It has been stated on the authority of George of Croyland, who wrote an account of the family in 1550, that the noble and knightly race of this name could trace themselves backwards thirteen generations beyond the Norman Conquest! For 13 we should probably read 3; and there is a more credible genealogy which makes the fundator gentis one Otho, whose son Stephen flourished under Edward the Confessor, as lord of Stevington, co. Lincoln, and his son, Ralph de Holand, it is said, continued to hold his lands by the permission of William the Conqueror. These lands were in the district of Lincolnshire still known as Holland, but there is also a Holland in Lancashire which belonged to the family. They were ennobled by Edward I., and their blood mingled with that of royalty itself by the marriage of Thomas de Holland with the lovely Joane Plantagenet, the Fair Maid of Kent, and granddaughter of King Edward III." [2]

Early Origins of the Holand family

The surname Holand was first found in Essex, where the Saxon Begmundus de Holande was listed c. 975. Lancashire would prove to be a strong homeland in early years as the Assize Rolls of 1246 record William de Holaund at that time. [3]

Some were found at Thingwall, a detached hamlet, in the township of Little Woolton, parish of Childwall, union and hundred of West Derby.

"Thyngwall was given in exchange by King John to an individual whose name is not now on record. In the following reign, Richard, son of Thurston de Holland, held a carucate of land here 'of our lord the king,' for one mark, in exchange for his inheritance in Snodden (Smithden), 'which the king placed in his own forest.'" [4]

"During the thirteenth century the descent of the manor [of West Derby] followed that of the wapentake and land between Ribble and Mersey, but in 1316 Thomas, earl of Lancaster, gave the manor, with 300 acres of wood, to Robert de Holand, and about four years later confirmed the grant with large additions, viz., the manor of West Derby. [5]

Another branch was found at Dalbury in Derbyshire in early times. "In the reign of Edward II. Dalbury and Lees were the property of Sir Robert Holland." [4]

In Devon, "Richard II. gave [Dartington] to his half-brother John Holland, Duke of Exeter; and he erected the great hall and its associated quadrangle, if, indeed, a portion of the latter is not somewhat earlier. The part of the mansion now inhabited was rebuilt in the time of Elizabeth. Margaret, Countess of Richmond, had a grant of the manor in 1487 for life." [6]

In Scotland, "there are several places named Houlland in Shetland and there are Hollands in Orkney. Hollandbush is in Stirlingshire, and Holland-Hirst is in the parish of Kirkintilloch. Willelmus de Holland, was a witness in the reign of Alexander II. Richard Holande, vicar of Ronaldsay, 1467 derived his surname from one of the three places so named in Orkney. " [7]

Early History of the Holand family

Before English spelling was standardized a few hundred years ago, spelling variations of names were a common occurrence. Elements of Latin, French and other languages became incorporated into English through the Middle Ages, and name spellings changed even among the literate. The variations of the surname Holand include Holland, Holand and others.

Notables of the family at this time include John Holland, 1st Duke of Exeter (c. 1352-1400), 1st Earl of Huntingdon, English nobleman, primarily remembered for helping cause the downfall of Thomas of Woodstock, 1st Duke of Gloucester and then for conspiring against Henry IV; Thomas Holland, (1374-1400), 1st Duke of Surrey, 3rd Earl of Kent, 4th Baron Holland, Earl Marshal, English nobleman; Duke of Exeter; Earl of Kent; Count of Holland; Alianore Holland, Countess of March (1370-1405), through her daughter, Anne Mortimer,Edmund Holland, 4th Earl of Kent, 5th Baron Holand, (1384-1408), Earl of Kent (c. 1400-c. 1407), the 106th Knight of...
Another 161 words (12 lines of text) are included under the topic Early Holand Notables in all our PDF Extended History products and printed products wherever possible.

Migration of the Holand family to Ireland

Some of the Holand family moved to Ireland, but this topic is not covered in this excerpt.
Another 61 words (4 lines of text) about their life in Ireland is included in all our PDF Extended History products and printed products wherever possible.

Holand migration to the United States +

Holand Settlers in United States in the 17th Century

Holand Settlers in United States in the 19th Century

Holand Settlers in New Zealand in the 19th Century