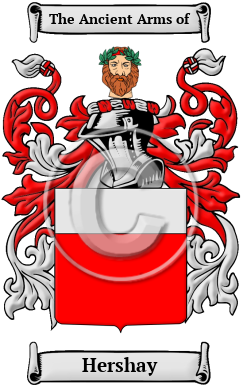 Hershay is an ancient Norman name that arrived in England after the Norman Conquest of 1066. The Hershay family lived in D'Hercé or D'Héricy, in the Mayenne region of France. [1]

Early Origins of the Hershay family

The surname Hershay was first found in Nottinghamshire, where Ivo Fitz Hercie was Viscount of Nottingham before 1130. Hugue d'Hericy, the first ancestor of this name, was recorded as "Companion in Arms of the Conqueror" at the Battle of Hastings in the Battle Abbey Rolls, establishing one of the oldest and most distinguished North Country families. [2]

Further to the south in the parish of Ruan Major, Cornwall, we found this interesting note about the family: "the manor of Erisey is partly in this parish and partly in Grade; and Erisey House is so situated as to have part of its buildings in each of these parishes. The manor house, which was the seat of the Eriseys for many generations, was rebuilt about the year 1620. This has for some considerable time been occupied by a farmer. The family of Erisey became extinct in the male line, about the year 1722; when this property passed in marriage with an heiress to Colonel John West." [4]

Early History of the Hershay family

Norman surnames are characterized by a multitude of spelling variations. The frequent changes in surnames are largely due to the fact that the Old and Middle English languages lacked definite spelling rules. The introduction of Norman French to England, as well as the official court languages of Latin and French, also had pronounced influences on the spelling of surnames. Since medieval scribes and church officials recorded names as they sounded, rather than adhering to any specific spelling rules, it was common to find the same individual referred to with different spellings. The name has been spelled Hercy, Herci, Hearsey, Hearse, Hersee, Hersey, Hershey, Herse, Hershee, Hershie and many more.

Outstanding amongst the family at this time was Malveysin de Hercy, Constable of the Honour of Tykhill, who became Baron of Grove during the 13th century. Sir Hugh de Hercy and Thomas Malet were Members of Parliament for Nottinghamshire in 1305 as was Sir Hugh de Hercy and Lawrence Chaworth in 1316. Later, Sir Thomas Hercy and Sir Robert Cockfield were Members of Parliament for Nottinghamshire in 1391. Hugo de Hercy was Sheriff of Nottinghamshire, Derbyshire and the Royal Forests in 1341...
Another 81 words (6 lines of text) are included under the topic Early Hershay Notables in all our PDF Extended History products and printed products wherever possible.

Migration of the Hershay family

Many English families emigrated to North American colonies in order to escape the political chaos in Britain at this time. Unfortunately, many English families made the trip to the New World under extremely harsh conditions. Overcrowding on the ships caused the majority of the immigrants to arrive diseased, famished, and destitute from the long journey across the stormy Atlantic. Despite these hardships, many of the families prospered and went on to make invaluable contributions to the development of the cultures of the United States and Canada. Early North American immigration records have revealed a number of people bearing the name Hershay or a variant listed above: Richard Hersey, who sailed to Virginia in 1635; Christian Hershee to Philadelphia, Pa. in 1743; David Herse to Barbados in 1745; David Hersey to Nova Scotia in 1763.