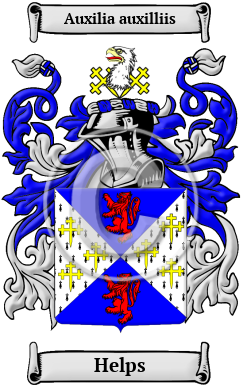 The name Helps came to England with the ancestors of the Helps family in the Norman Conquest of 1066. It comes from the Old English personal name Helps, which is thought to be a shortened form of a longer name such as Helpric, or some other name with the first element help, meaning aid or assist. It is also possible that the name is of metronymic descent and derives from the Old Norse female personal name Hialp. [1]

Evidence for both of these theories exists, but time has confused the two derivations and etymologists now disagree on which is appropriate in any given instance.

Early Origins of the Helps family

The surname Helps was first found in Lincolnshire where Helpe Arbalistarius was the first recording in the Pipe Rolls of 1181. Walter Help was later listed in Northumberland in 1230. Over one hundred years later, Gilbert Helpe was listed in the Subsidy Rolls for Suffol in 1327. [1]

Interestingly, the same author notes that Simon Helpusgod who was listed in the Subsidy Rolls for Sussex in 1296, presumably derived his name from 'may God help us." [1]

Turning back the clock for a moment, one author presumes that name was actually Norman as he notes that the Magni Rotuli Scaccarii Normanniae lists Hugo de Helpe, Normandy, 1180-95. [2]

Early History of the Helps family

This web page shows only a small excerpt of our Helps research. Another 57 words (4 lines of text) are included under the topic Early Helps History in all our PDF Extended History products and printed products wherever possible.

Anglo-Norman names tend to be marked by an enormous number of spelling variations. This is largely due to the fact that Old and Middle English lacked any spelling rules when Norman French was introduced in the 11th century. The languages of the English courts at that time were French and Latin. These various languages mixed quite freely in the evolving social milieu. The final element of this mix is that medieval scribes spelled words according to their sounds rather than any definite rules, so a name was often spelled in as many different ways as the number of documents it appeared in. The name was spelled Helps, Help and others.

More information is included under the topic Early Helps Notables in all our PDF Extended History products and printed products wherever possible.

Helps migration to the United States +

Because of the political and religious discontent in England, families began to migrate abroad in enormous numbers. Faced with persecution and starvation at home, the open frontiers and generally less oppressive social environment of the New World seemed tantalizing indeed to many English people. The trip was difficult, and not all made it unscathed, but many of those who did get to Canada and the United States made important contributions to the young nations in which they settled. Some of the first North American settlers with Helps name or one of its variants:

Helps Settlers in United States in the 18th Century

Helps Settlers in United States in the 19th Century

Helps Settlers in Australia in the 19th Century