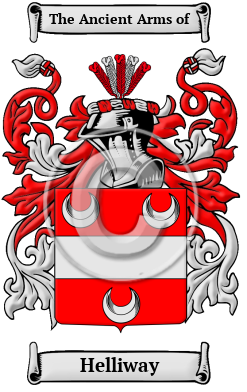 Helliway is a name whose history is connected to the ancient Anglo-Saxon tribes of Britain. The name is derived from when the Helliway family once lived as inhabitants at the hollow-way or holy way. [1]

Helliway is a topographic surname, which was given to a person who resided near a physical feature such as a hill, stream, church, or type of tree. Habitation names form the other broad category of surnames that were derived from place-names.

Early Origins of the Helliway family

The surname Helliway was first found in Middlesex at Holloway, a district in the parish of Islington, Finsbury division of the hundred of Ossulstone. [3]

Early History of the Helliway family

Sound was what guided spelling in the essentially pre-literate Middle Ages, so one person's name was often recorded under several variations during a single lifetime. Also, before the advent of the printing press and the first dictionaries, the English language was not standardized. Therefore, spelling variations were common, even among the names of the most literate people. Known variations of the Helliway family name include Holloway, Hollway, Holoway, Hollaway, Hollywood and others.

Notables of this surname at this time include: James Holloway (died 1684), an English merchant from Bristol, and conspirator of the Rye House Plot. John Holloway (c. 1666-1734), was a politician and lawyer in the British colony of Virginia, Speaker of the House of Burgesses (1720-1734) and first Mayor of Williamsburg, Virginia (1722-1723.) Benjamin Holloway (1691?-1759), was an English divine, born at Stony Stratford, Buckinghamshire, about 1691, was the son of Joseph Holloway, 'brasiator' (maltster), of that town. [2] James Holloway (d. 1684), was an English "conspirator, a citizen of Bristol, probably imbibed strong protestant opinions from the master to whom he was apprenticed...
Another 152 words (11 lines of text) are included under the topic Early Helliway Notables in all our PDF Extended History products and printed products wherever possible.

Migration of the Helliway family to Ireland

Some of the Helliway family moved to Ireland, but this topic is not covered in this excerpt.
Another 193 words (14 lines of text) about their life in Ireland is included in all our PDF Extended History products and printed products wherever possible.

Migration of the Helliway family

For political, religious, and economic reasons, thousands of English families boarded ships for Ireland, Canada, the America colonies, and many of smaller tropical colonies in the hope of finding better lives abroad. Although the passage on the cramped, dank ships caused many to arrive in the New World diseased and starving, those families that survived the trip often went on to make valuable contributions to those new societies to which they arrived. Early immigrants bearing the Helliway surname or a spelling variation of the name include: Dorothy Hollway settled in Barbados in 1663 with William, her husband; William Holloway settled in Maryland in 1775; Eadie Holloway settled with Elizabeth and Joe in Virginia in 1635.