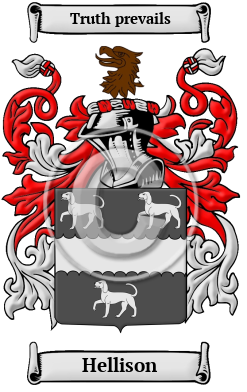 Hellison comes from the ancient Dalriadan clans of Scotland's west coast and Hebrides islands. The name comes from the name for the son of "Ellis" or Ellis' son. Conversely, the surname could be is derived from "Alice" as in "the son of Alice." It is likely though that the name was derived from "Ellis" rather than the female personal name. [1] [2]

Early Origins of the Hellison family

The surname Hellison was first found in the county of Lanarkshire (Gaelic: Siorrachd Lannraig) a former county in the central Strathclyde region of Scotland, now divided into the Council Areas of North Lanarkshire, South Lanarkshire, and the City of Glasgow, where they acquired some time before 1300 the territories of their family seat at Loupe. They were descended from Angus Mor MacDonnell, Lord of the Isles, their Gaelic name was MacAllister, and it is difficult through history to distinguish one name from the other.

Early History of the Hellison family

This web page shows only a small excerpt of our Hellison research. Another 42 words (3 lines of text) covering the years 1296, 1314 and are included under the topic Early Hellison History in all our PDF Extended History products and printed products wherever possible.

The translation of Gaelic names in the Middle Ages was not a task undertaken with great care. Records from that era show an enormous number of spelling variations, even in names referring to the same person. Over the years Hellison has appeared as Allison, Alison, Alinson, Allinson, McAllister, MacAllister, Ellison and many more.

More information is included under the topic Early Hellison Notables in all our PDF Extended History products and printed products wherever possible.

Migration of the Hellison family to Ireland

Some of the Hellison family moved to Ireland, but this topic is not covered in this excerpt.
Another 57 words (4 lines of text) about their life in Ireland is included in all our PDF Extended History products and printed products wherever possible.

Migration of the Hellison family

Many of the ancestors of Dalriadan families who arrived in North America still live in communities along the east coast of Canada and the United States. In the American War of Independence many of the original settlers traveled north to Canada as United Empire Loyalists. In the late 19th and early 20th centuries the ancestors of many Scots began recovering their collective national heritage through Clan societies, highland games, and other patriotic events. Research into the origins of individual families in North America revealed records of the immigration of a number of people bearing the name Hellison or a variant listed above: William Allison who settled in Pennsylvania in 1764.