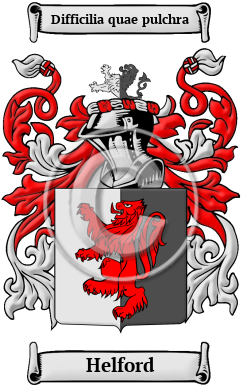 Helford is a name whose history is connected to the ancient Anglo-Saxon tribes of Britain. The name is derived from when the Helford family once lived in a region called Elford in the county of Northumberland and in Staffordshire. The surname Helford is a topographic surname, which was given to a person who resided near a physical feature such as a hill, stream, church, or type of tree. Habitation names form the other broad category of surnames that were derived from place-names. They were derived from pre-existing names for towns, villages, parishes, or farmsteads. Other local names are derived from the names of houses, manors, estates, regions, and entire counties. As a general rule, the greater the distance between an individual and their homeland, the larger the territory they were named after.

Early Origins of the Helford family

The surname Helford was first found in Northumberland at Elford, which dates back to at least 1256 when it was listed as Eleford and had two possible origins: having derived from the Old English personal name Ella or Ellen + ford as in "ford of a man called Ella"; and "ford where elder-trees grow." [1] [2]

Elford is also a village and civil parish in Lichfield District of Staffordshire that dates back to 1002 when it was listed as Elleford and later was listed in the Domesday Book of 1086 as Eleford. [3]

While this latter village is older, the Northumberland village is where the first records of the name were found.

Sheepstor, Devon "was the ancient home of the Elfords, and one of these, a staunch Royalist, is said to have found refuge from his enemies in a cavity amidst the confused heap or 'clatter ' of detached rocks that clothes the precipitous side of Sheepstor Hill, and possibly named it Schittis or Schattis Tor the older form from its shattered aspect. The cavity is now commonly called the Pixies' Hole. Elford is said to have employed his time in painting its rocky sides, but of this there is no trace." [5]

Early History of the Helford family

Sound was what guided spelling in the essentially pre-literate Middle Ages, so one person's name was often recorded under several variations during a single lifetime. Also, before the advent of the printing press and the first dictionaries, the English language was not standardized. Therefore, spelling variations were common, even among the names of the most literate people. Known variations of the Helford family name include Elford, Elfords, Elfford, Elffords and others.

Distinguished members of the family include Richard Elford (1677?-1714) English singer, lay vicar at St Paul's Cathedral and Westminster Abbey, he sang before Queen Anne at St. James's Palace on her birthday in 1703. He "became famous in London as a singer of sacred music at the beginning of the seventeenth century. In his youth he belonged to the choirs of Lincoln and Durham cathedrals, and came to London to display his fine counter-tenor on the stage. His success at the theatres was small, owing to his awkward and ungainly appearance. Elford was also admired in profane music; he was chosen...
Another 434 words (31 lines of text) are included under the topic Early Helford Notables in all our PDF Extended History products and printed products wherever possible.

Helford migration to the United States +

For political, religious, and economic reasons, thousands of English families boarded ships for Ireland, Canada, the America colonies, and many of smaller tropical colonies in the hope of finding better lives abroad. Although the passage on the cramped, dank ships caused many to arrive in the New World diseased and starving, those families that survived the trip often went on to make valuable contributions to those new societies to which they arrived. Early immigrants bearing the Helford surname or a spelling variation of the name include:

Helford Settlers in United States in the 18th Century

Helford Settlers in Australia in the 19th Century

Helford Settlers in New Zealand in the 19th Century