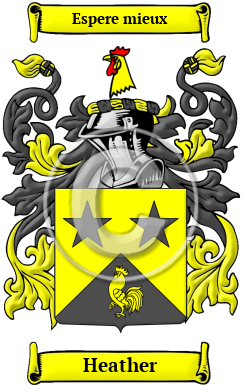 The ancient roots of the Heather family name are in the Anglo-Saxon culture. The name Heather comes from when the family lived on a heath, which is an area of level, uncultivated land with poor, coarse, undrained soil and rich deposits of peat or peaty humus. The surname Heather belongs to the class of topographic surnames, which were given to people who resided near physical features such as hills, streams, churches, or types of trees.

Early Origins of the Heather family

The surname Heather was first found in Durham where it was first listed as Atte-Hethe, Apud Hethe and Del la Hethe in the Rotuli Hundredorum of 1279. [1] The name was denoted for someone who lived on or by a heath, typically filled with heather. [2] Kirby's Quest for Somerset listed Adam atte Hethe and John atte Hethe during the reign of Edward III. [3]

Early History of the Heather family

One relatively recent invention that did much to standardize English spelling was the printing press. However, before its invention even the most literate people recorded their names according to sound rather than spelling. The spelling variations under which the name Heather has appeared include Heath, Hethe and others.

Notables of the family at this time include Sir Robert Heath (1575-1649), Attorney General of England, and founder of North Carolina and South Carolina. He was the son of Robert Heath of Brasted, Kent, a member of the Inner Temple and was born at Brasted on 20 May 1575. [5] James Heath (1629-1664), was a historian, son of Robert Heath, the king's cutler, who lived in the Strand, was born in London in 1629, and educated in Westminster School. [5] Thomas Heath (fl. 1583), was an English mathematician, born in London and was admitted probationer fellow of All Souls, Oxford, in 1567. [5] John...
Another 129 words (9 lines of text) are included under the topic Early Heather Notables in all our PDF Extended History products and printed products wherever possible.

In New Zealand, the name Heather is the 617th most popular surname with an estimated 1,155 people with that name. [6]

Migration of the Heather family to Ireland

Some of the Heather family moved to Ireland, but this topic is not covered in this excerpt. More information about their life in Ireland is included in all our PDF Extended History products and printed products wherever possible.

Heather migration to the United States +

At this time, the shores of the New World beckoned many English families that felt that the social climate in England was oppressive and lacked opportunity for change. Thousands left England at great expense in ships that were overcrowded and full of disease. A great portion of these settlers never survived the journey and even a greater number arrived sick, starving, and without a penny. The survivors, however, were often greeted with greater opportunity than they could have experienced back home. These English settlers made significant contributions to those colonies that would eventually become the United States and Canada. An examination of early immigration records and passenger ship lists revealed that people bearing the name Heather arrived in North America very early:

Heather Settlers in United States in the 17th Century

Heather Settlers in United States in the 19th Century

Heather Settlers in United States in the 20th Century

Heather Settlers in Australia in the 19th Century

Heather Settlers in New Zealand in the 19th Century

Heather Settlers in West Indies in the 17th Century

Historic Events for the Heather family +