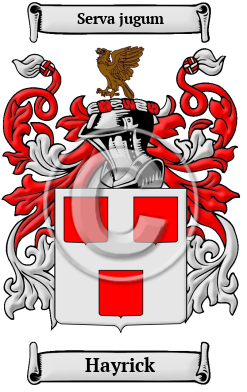 The Pictish clans of ancient Scotland were the ancestors of first people to use the name Hayrick. The name was found in ancient chronicles where the tradition relating this distinguished Pictish family of Hay begins during an attack by the Danes in the reign of Kenneth III of Scotland in 980. The defeated Scottish army retired through a narrow pass near Lochnarty in Perthshire which was later defended by a local farmer and his two sons. Upbraiding the retiring Scottish army, the farmer rallied the retreating Scottish and eventually defeated the Danes. They took the yokes from the oxen with which they were ploughing, and so belaboured the invaders as to drive them from the field, amidst shouts of Hay! Hay! The King rewarded the family with many grants of land including the Carse of Gowrie on the River Tay, traditionally marked by the limit of a falcon's flight, six miles in length. There is a monument still extant called the Falcon's Stone marking the falcon's place of rest. [1] The king also assigned three shields or escutcheons for the arms of the family, to intimate that the father and his two sons had been the three fortunate shields of Scotland.

Early Origins of the Hayrick family

The surname Hayrick was first found in Perthshire (Gaelic: Siorrachd Pheairt) former county in the present day Council Area of Perth and Kinross, located in central Scotland, but looking further back we find Hay family of Normandy was of considerable rank and importance in the year 823 AD.

Early History of the Hayrick family

In the Middle ages, spelling and translation were not yet regulated by any general rules. spelling variations in names were common even among members of one family unit. Hayrick has appeared Hay, Haye, Haya, Mac Garaidh (Gaelic) and others.

Notable amongst the Clan at this time was Sir Gilbert de la Haye (d. 1333), Lord High Constable of Scotland from 1309; Gilbert Hay (c.1403), Scottish poet and translator, author of "The Buik of King Alexander the Conquerour" and other works; Sir Thomas de la Hay (c. 1342-1406), Lord High Constable of Scotland, third member of the Hay family to hold this post, his predecessor was David Hay; John Hay, 1st...
Another 71 words (5 lines of text) are included under the topic Early Hayrick Notables in all our PDF Extended History products and printed products wherever possible.

Migration of the Hayrick family to Ireland

Some of the Hayrick family moved to Ireland, but this topic is not covered in this excerpt.
Another 60 words (4 lines of text) about their life in Ireland is included in all our PDF Extended History products and printed products wherever possible.

Migration of the Hayrick family

Faced by this persecution and the generally unstable political climate of those days, many Scots chose to leave their homeland for Ireland, Australia, and North America in search of greater opportunity and freedom. The colonies across the Atlantic were the most popular choice, but a passage there was neither cheap nor easily suffered. Passengers arrived sick and poor, but those who made it intact often found land and more tolerant societies in which to live. These brave settlers formed the backbone of the burgeoning nations of Canada and the United States. It is only this century that the ancestors of these families have begun to recover their collective identity through the patriotic highland games and Clan societies that have sprung up throughout North America. Research into early immigration and passenger lists revealed many immigrants bearing the name Hayrick: Daniel Hay who settled in Maine in 1606; 14 years before the "Mayflower"; Arthur Hay settled in Virginia in 1663; Elizabeth Hay settled in Virginia in 1654.