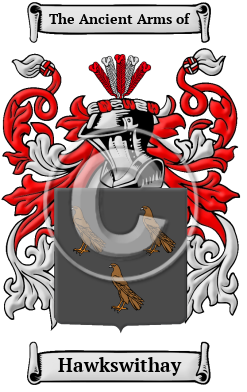 Hawkswithay is a name whose history is connected to the ancient Anglo-Saxon tribes of Britain. The name is derived from when the Hawkswithay family once lived in one of two similarly-named places. The parish of Hawksworth is located eight miles from Newark in Nottinghamshire. The township of Hawkswith is in the parish of Arncliffe in the West Riding of Yorkshire. The surname Hawkswithay belongs to the large category of Anglo-Saxon habitation names, which are derived from pre-existing names for towns, villages, parishes, or farmsteads.

Early Origins of the Hawkswithay family

The surname Hawkswithay was first found in Yorkshire at Hawksworth, which "comprises by computation 2000 acres, chiefly the property of F. Hawkesworth Fawkes, Esq., who is Lord of the Manor." [1]

Early History of the Hawkswithay family

Sound was what guided spelling in the essentially pre-literate Middle Ages, so one person's name was often recorded under several variations during a single lifetime. Also, before the advent of the printing press and the first dictionaries, the English language was not standardized. Therefore, spelling variations were common, even among the names of the most literate people. Known variations of the Hawkswithay family name include Hawkesworth, Hawksworth, Hawkeworth and others.

Notables of this surname at this time include: Walter Hawkesworth (d. 1606), an English dramatist, the second son of Walter Hawkesworth of Hawkesworth, Yorkshire, by his wife Isabel, daughter and coheiress of Thomas Colthurst of Edisforth in the same county. [5] John Hawkesworth (c.1715-1773), was an English writer. He was commissioned by the Admiralty to edit Captain James Cook's papers relative to his first voyage. He was of humble origin. In his youth he was 'a hired clerk to one Harwood, an attorney in Grocers' Alley...
Another 85 words (6 lines of text) are included under the topic Early Hawkswithay Notables in all our PDF Extended History products and printed products wherever possible.

Migration of the Hawkswithay family

For political, religious, and economic reasons, thousands of English families boarded ships for Ireland, Canada, the America colonies, and many of smaller tropical colonies in the hope of finding better lives abroad. Although the passage on the cramped, dank ships caused many to arrive in the New World diseased and starving, those families that survived the trip often went on to make valuable contributions to those new societies to which they arrived. Early immigrants bearing the Hawkswithay surname or a spelling variation of the name include: John Hawksworth settled in Barbados in 1680; along with William, and his servants; Charles and Thomas Hawksworth arrived in Philadelphia in 1860; Thomas Hawkesworth settled in Boston in 1635.