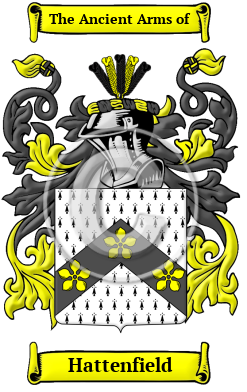 The Anglo-Saxon name Hattenfield comes from the family having resided in either of the places called Heathfield in Somerset or Sussex, or in one of the various settlements called Hatfield in Essex, Herefordshire, Nottinghamshire, Worcester, the East Riding of Yorkshire, or the North Riding of Yorkshire.

Early Origins of the Hattenfield family

Early History of the Hattenfield family

This web page shows only a small excerpt of our Hattenfield research. Another 78 words (6 lines of text) covering the years 1119, 1652, 1640, 1652 and 1652 are included under the topic Early Hattenfield History in all our PDF Extended History products and printed products wherever possible.

Hattenfield has been spelled many different ways. Before English spelling became standardized over the last few hundred years, spelling variations in names were a common occurrence. As the English language changed in the Middle Ages, absorbing pieces of Latin and French, as well as other languages, the spelling of people's names also changed considerably, even over a single lifetime. Spelling variants included: Hatfield, Hatfeild, Hadfield and others.

Notables of this surname at this time include: Martha Hatfield ( fl. 1652), 'The Wise Virgin,' daughter of Anthony Hatfield, by his wife Faith Westley, was born at Leighton, Yorkshire, 27 Sept. 1640. "The Hatfields were Puritans. In April 1652 Martha was seized with an illness which the physicians were unable to define, but which seems to have been a form of catalepsy. For seventeen days she lay stiff and was unable to speak, and it was said...
Another 76 words (5 lines of text) are included under the topic Early Hattenfield Notables in all our PDF Extended History products and printed products wherever possible.

Migration of the Hattenfield family to Ireland

Some of the Hattenfield family moved to Ireland, but this topic is not covered in this excerpt. More information about their life in Ireland is included in all our PDF Extended History products and printed products wherever possible.

Migration of the Hattenfield family

In an attempt to escape the chaos experienced in England, many English families boarded overcrowded and diseased ships sailing for the shores of North America and other British colonies. Those families hardy enough, and lucky enough, to make the passage intact were rewarded with land and a social environment less prone to religious and political persecution. Many of these families became important contributors to the young colonies in which they settled. Early immigration and passenger lists have documented some of the first Hattenfields to arrive on North American shores: George Hadfield who settled in New England in 1802; James, John, Robert and Thomas Hadfield arrived in Philadelphia between 1820 and 1860; Thomas and Grace Hatfeild settled in Virginia in 1653.