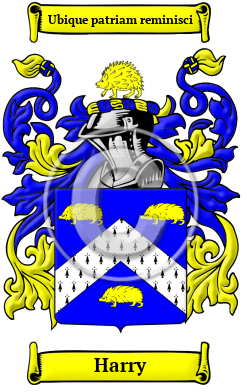 The ancient Normans that arrived in England following the Conquest of 1066 are the initial ancestors from which the many generations of the Harry family have grown. The name Harry was given to a member of the family who was a person who was the son of the ruler of the property upon which he lived. Initially, le Herisse, the name came to England with the Norman Conquest, and is of Old French derivation. Another derivation, which is probably more common shows that the name is a version of the Old English given name Harry. [1] Although both derivations are valid time has confused them and historians now disagree on which is appropriate in a given situation.

Early Origins of the Harry family

The surname Harry was first found in Normandy, where Hericius and his brothers were in 1022 prohibited by King Robert of France from making inroads of on the estates of a neighbouring abbey. "Henricus was father of Ancelin de Beaumont who in 1086 held a barony in Nottinghamshire. Ivo Fitz-Herice or De Heriz, his son was Viscount of Nottinghamshire before 1130." [2]

Early History of the Harry family

Before English spelling was standardized a few hundred years ago, spelling variations of names were a common occurrence. Elements of Latin, Norman French and other languages became incorporated into English throughout the Middle Ages, and name spellings changed even among the literate. The variations of the surname Harry include Harris, Harries, Harrys, Harryss, Haries, Haris, Hairis and many more.

Outstanding amongst the family at this time was John ap Harry of Poston in Vowchurch, High Sheriff of Herefordshire in 1399; Robert Harris (1581-1658), an English clergyman, known as a Puritan preacher, member of the Westminster Assembly, and President of Trinity College, Oxford; John Harris (Harrys) (c.1588-1658), an English academic and clergyman, Regius Professor of Greek at Oxford, long-time Warden of Winchester College, and a member of the Westminster Assembly; Peter Harris (the elder) (died 1680), a British buccaneer, one of the captains...
Another 82 words (6 lines of text) are included under the topic Early Harry Notables in all our PDF Extended History products and printed products wherever possible.

Migration of the Harry family to Ireland

Some of the Harry family moved to Ireland, but this topic is not covered in this excerpt.
Another 67 words (5 lines of text) about their life in Ireland is included in all our PDF Extended History products and printed products wherever possible.

Harry migration to the United States +

In England at this time, the uncertainty of the political and religious environment of the time caused many families to board ships for distant British colonies in the hopes of finding land and opportunity, and escaping persecution. The voyages were expensive, crowded, and difficult, though, and many arrived in North America sick, starved, and destitute. Those who did make it, however, were greeted with greater opportunities and freedoms that they could have experienced at home. Many of those families went on to make important contributions to the young nations in which they settled. Early immigration records have shown some of the first Harrys to arrive on North American shores:

Harry Settlers in United States in the 17th Century

Harry Settlers in United States in the 18th Century

Harry Settlers in United States in the 19th Century

Harry Settlers in United States in the 20th Century

Harry Settlers in Canada in the 18th Century

Harry Settlers in Australia in the 19th Century

Harry Settlers in New Zealand in the 19th Century

Historic Events for the Harry family +

Suggested Readings for the name Harry +