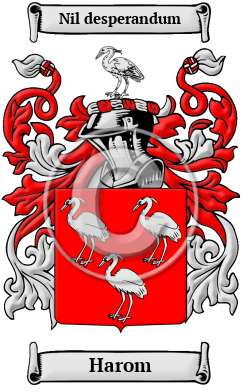 The family name Harom is thought to be of Norman origins. Originally, Harom was a name given to a person who was long legged or of tall stature. The name Harom is derived from the Old English word heiroun, which meant heron.

Early Origins of the Harom family

The surname Harom was first found in Northumberland at Thornton, a township, in the parish of Norham, union of Berwick-upon-Tweed. "This place was the manor and residence of a family named Heron." [3]

And in the parish of Ford, Northumberland, another early family record was found. " On the western side of the village is Ford Castle, erected in 1287 by Sir William Heron, and rebuilt by the late Lord Delaval; two towers, the remains of the former castle, are retained in the present structure. The castle was demolished by the Scots in 1385." [3]

Further to the north in Scotland, "the old family of Heron in the Stewertry claim descent from the Herons of Chipchase who appear in Northumberland in the eleventh century. " [5]

We did find this interesting anecdote: "Sir William Heron, Sheriff of Northumberland 17 Hen. VIII., was the father of the beautiful Elizabeth, who detained James IV. at Ford, so as to give the Earl of Surrey time and opportunity for advancing towards the Borders with a large army: From its strong position, commanding the bridge over the river Till, the castle had been a constant bone of contention between the English and Scots; and was entirely demolished by the latter in 1385 : but its most memorable capture was by King James in 1513, for it thus became for ever associated with 'the tale of Flodden, that is written in blood on every Scottish heart.'" [2]

Early History of the Harom family

Spelling variations in names were a common occurrence in the eras before English spelling was standardized a few hundred years ago. In the Middle Ages, even the literate regularly changed the spellings of their names as the English language incorporated elements of French, Latin, and other European languages. Many variations of the name Harom have been found, including Herron, Heron and others.

Another 45 words (3 lines of text) are included under the topic Early Harom Notables in all our PDF Extended History products and printed products wherever possible.

Migration of the Harom family to Ireland

Some of the Harom family moved to Ireland, but this topic is not covered in this excerpt.
Another 60 words (4 lines of text) about their life in Ireland is included in all our PDF Extended History products and printed products wherever possible.

Migration of the Harom family

For many English families, the social climate in England was oppressive and lacked opportunity for change. For such families, the shores of Ireland, Australia, and the New World beckoned. They left their homeland at great expense in ships that were overcrowded and full of disease. Many arrived after the long voyage sick, starving, and without a penny. But even those were greeted with greater opportunity than they could have experienced back home. Numerous English settlers who arrived in the United States and Canada at this time went on to make important contributions to the developing cultures of those countries. Many of those families went on to make significant contributions to the rapidly developing colonies in which they settled. Early North American records indicate many people bearing the name Harom were among those contributors: John Heron, who settled in Barbados in 1635; Patrick Herron, who settled in Boston in 1651; Alexander Herron, who settled in Georgia in 1738 with his wife and daughter.