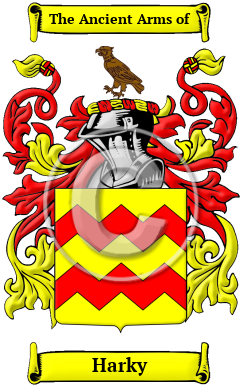 Early Origins of the Harky family

Early History of the Harky family

This web page shows only a small excerpt of our Harky research. Another 69 words (5 lines of text) covering the years 189 and are included under the topic Early Harky History in all our PDF Extended History products and printed products wherever possible.

The spellings of Scottish names dating from the medieval era often bear little resemblance to those seen today. They vary enormously because scribes in that time spelled according to their ears. Some spelling variations of the name Harky include Harkin, Harken, Harkins, Hacon, Hakon, Haken and many more.

More information is included under the topic Early Harky Notables in all our PDF Extended History products and printed products wherever possible.

Migration of the Harky family to Ireland

Some of the Harky family moved to Ireland, but this topic is not covered in this excerpt.
Another 83 words (6 lines of text) about their life in Ireland is included in all our PDF Extended History products and printed products wherever possible.

Migration of the Harky family

The farms of Scottish settlers soon dotted the east coast of the colonies that would become the nations of the United States and Canada. Many of those migrants and their children went on to play important roles in the founding the great nations of North America. Early North American immigration records have revealed a number of people bearing the Scottish name Harky or a variant listed above, including: Daniel, James, John, Patrick, William Harkin arrived in Philadelphia from about 1800 to 1870; Andrew, Daniel, Edward, James, John, Patrick and William Harkins arrived in Philadelphia between 1830 and 1870..