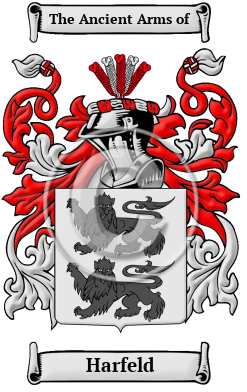 The name Harfeld was brought to England in the wave of migration that followed the Norman Conquest of 1066. The Harfeld family lived in Harivel which is "very common in Normandy. It is synonymous with Haridelle, still found in our modem dictionaries. 'Harivels,' or 'harivilliers,' are frequently seen at our fairs; they are persons dealing only in 'harins' or 'haridelles,' small or inferior horses, leaving the trade in riding horses and animals of a superior quality to the regular horse dealers.' There exists, however, an aristocratic family named Le Harivel, that is found in Normandy as early as the fifteenth century, and once possessed several important fiefs, such as Sourdeval, Beaumanoir, Maizet, Gonneville, Flagy, &c. It furnished proofs of its nobility in 1463, and in 1671 was again declared Estre noble par charte de franc-fiefs. " [1]

Early Origins of the Harfeld family

The surname Harfeld was first found in Somerset where "John de Harewell was chaplain to Edward the Black Prince, Chancellor of Gascony, and Bishop of Wells. He lies buried before the altar of St. Calix in Wells Cathedral. " [1]

Early History of the Harfeld family

Spelling variations in names were a common occurrence in the eras before English spelling was standardized a few hundred years ago. In the Middle Ages, even the literate regularly changed the spellings of their names as the English language incorporated elements of French, Latin, and other European languages. Many variations of the name Harfeld have been found, including Harewell, Harwell, Harwall, Harewall and others.

More information is included under the topic Early Harfeld Notables in all our PDF Extended History products and printed products wherever possible.

Migration of the Harfeld family

For many English families, the social climate in England was oppressive and lacked opportunity for change. For such families, the shores of Ireland, Australia, and the New World beckoned. They left their homeland at great expense in ships that were overcrowded and full of disease. Many arrived after the long voyage sick, starving, and without a penny. But even those were greeted with greater opportunity than they could have experienced back home. Numerous English settlers who arrived in the United States and Canada at this time went on to make important contributions to the developing cultures of those countries. Many of those families went on to make significant contributions to the rapidly developing colonies in which they settled. Early North American records indicate many people bearing the name Harfeld were among those contributors: the name represented in many forms and recorded from the mid 17th century in the great migration from Europe. Migrants settled in the eastern seaboard from Newfoundland, to Maine, to Virginia, the Carolinas, and to the islands..