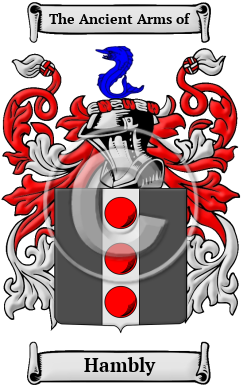 Early Origins of the Hambly family

The surname Hambly was first found in Cornwall where "Hambly is an old name of the 17th century in the parishes of St. Breward, Egloshayle, and Bodmin; in the last two localities it is still represented." [1] "Hamley and Hambly are fairly common surnames in Cornwall." [2]

Early History of the Hambly family

This web page shows only a small excerpt of our Hambly research. Another 26 words (2 lines of text) covering the years 1637, 1717, 1760 and 1837 are included under the topic Early Hambly History in all our PDF Extended History products and printed products wherever possible.

Notable amongst the family at this time was William Hamley, born in Bodmin, Cornwall, founder of what is today known as Hamleys, one of the largest toy stores in the world. He originally founded a toy shop called "Noah's Ark&quot...
Another 40 words (3 lines of text) are included under the topic Early Hambly Notables in all our PDF Extended History products and printed products wherever possible.

In the United States, the name Hambly is the 18,673rd most popular surname with an estimated 2,487 people with that name. [5]

Hambly migration to the United States +

An examination into the immigration and passenger lists has discovered a number of people bearing the name Hambly:

Hambly Settlers in United States in the 19th Century

Hambly Settlers in United States in the 20th Century

Hambly Settlers in Australia in the 19th Century

Hambly Settlers in New Zealand in the 19th Century

Historic Events for the Hambly family +