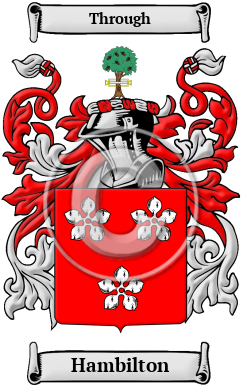 The Hambilton family name, was a Norman name that came to Scotland from England. It is thought to derive from the village of Hamilton or Hameldune near Barkby in the county of Leicestershire. The village name comes from the Old English elements "hamel," which means "blunt," "flat-topped," or "crooked," and "dun," which means hill. There is a town of Hamilton near Glasgow, which took its name from the family, but may in turn have spawned more instances of the surname.

Early Origins of the Hambilton family

The surname Hambilton was first found in Renfrewshire (Gaelic: Siorrachd Rinn Friù), a historic county of Scotland, today encompassing the Council Areas of Renfrew, East Renfrewshire, and Iverclyde, in the Strathclyde region of southwestern Scotland, where they were granted lands by King Robert the Bruce of Scotland.

Early History of the Hambilton family

Notable among the family at this time was Sir Patrick Hamilton (d. 1520), a Scottish nobleman, and younger brother of aforementioned James Hamilton, 1st Earl of Arran; his son, Patrick Hamilton (c.1504-1528), Scottish Protestant martyr, charged with heresy, sentenced by Archbishop Beaton, and burned at the stake in 1528; Thomas Hamilton, 1st Earl of Haddington (1563-1637), Scottish administrator, Lord Advocate, judge, and Lord Lieutenant of Haddingtonshire; Patrick Hamilton (c. 1575-1658), a minister of The Church of Scotland during a turbulent period in Scotland's history, also a poet; Archibald Hamilton (1580-1659), the fourth Anglican Archbishop of Cashel, nominated Bishop of Killala and...
Another 161 words (12 lines of text) are included under the topic Early Hambilton Notables in all our PDF Extended History products and printed products wherever possible.

Migration of the Hambilton family to Ireland

Some of the Hambilton family moved to Ireland, but this topic is not covered in this excerpt.
Another 159 words (11 lines of text) about their life in Ireland is included in all our PDF Extended History products and printed products wherever possible.

Migration of the Hambilton family