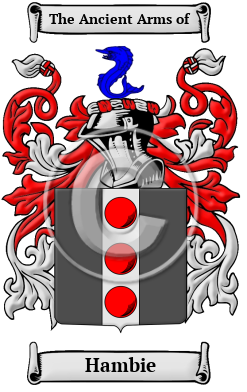 Early Origins of the Hambie family

The surname Hambie was first found in Cornwall where "Hambly is an old name of the 17th century in the parishes of St. Breward, Egloshayle, and Bodmin; in the last two localities it is still represented." [1] "Hamley and Hambly are fairly common surnames in Cornwall." [2]

Early History of the Hambie family

This web page shows only a small excerpt of our Hambie research. Another 26 words (2 lines of text) covering the years 1637, 1717, 1760 and 1837 are included under the topic Early Hambie History in all our PDF Extended History products and printed products wherever possible.

Notable amongst the family at this time was William Hamley, born in Bodmin, Cornwall, founder of what is today known as Hamleys, one of the largest toy stores in the world. He originally founded a toy shop called "Noah's Ark&quot...
Another 40 words (3 lines of text) are included under the topic Early Hambie Notables in all our PDF Extended History products and printed products wherever possible.

Migration of the Hambie family

Research into the origins of individual families in North America has revealed records of the immigration of a number of people bearing the name Hambie or a variant listed above: William Hambly arrived in San Francisco in 1852; John Hamble settled Pennsylvania in 1773; William Hamly settled in Philadelphia in 1854.