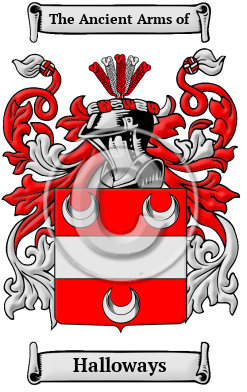 The ancestry of the name Halloways dates from the ancient Anglo-Saxon culture of Britain. It comes from when the family lived as inhabitants at the hollow-way or holy way. [1]

Halloways is a topographic surname, which was given to a person who resided near a physical feature such as a hill, stream, church, or type of tree. Habitation names form the other broad category of surnames that were derived from place-names.

Early Origins of the Halloways family

The surname Halloways was first found in Middlesex at Holloway, a district in the parish of Islington, Finsbury division of the hundred of Ossulstone. [3]

Early History of the Halloways family

Spelling variations in names were a common occurrence before English spelling was standardized a few hundred years ago. In the Middle Ages, even the literate spelled their names differently as the English language incorporated elements of French, Latin, and other European languages. Many variations of the name Halloways have been found, including Holloway, Hollway, Holoway, Hollaway, Hollywood and others.

Notables of this surname at this time include: James Holloway (died 1684), an English merchant from Bristol, and conspirator of the Rye House Plot. John Holloway (c. 1666-1734), was a politician and lawyer in the British colony of Virginia, Speaker of the House of Burgesses (1720-1734) and first Mayor of Williamsburg, Virginia (1722-1723.) Benjamin Holloway (1691?-1759), was an English divine, born at Stony Stratford, Buckinghamshire, about 1691, was the son of Joseph Holloway, 'brasiator' (maltster), of that town. [2] James Holloway (d. 1684), was an English "conspirator, a citizen of Bristol, probably imbibed strong protestant opinions from the master to whom he was apprenticed...
Another 152 words (11 lines of text) are included under the topic Early Halloways Notables in all our PDF Extended History products and printed products wherever possible.

Migration of the Halloways family to Ireland

Some of the Halloways family moved to Ireland, but this topic is not covered in this excerpt.
Another 193 words (14 lines of text) about their life in Ireland is included in all our PDF Extended History products and printed products wherever possible.

Migration of the Halloways family

Families began migrating abroad in enormous numbers because of the political and religious discontent in England. Often faced with persecution and starvation in England, the possibilities of the New World attracted many English people. Although the ocean trips took many lives, those who did get to North America were instrumental in building the necessary groundwork for what would become for new powerful nations. Some of the first immigrants to cross the Atlantic and come to North America bore the name Halloways, or a variant listed above: Dorothy Hollway settled in Barbados in 1663 with William, her husband; William Holloway settled in Maryland in 1775; Eadie Holloway settled with Elizabeth and Joe in Virginia in 1635.