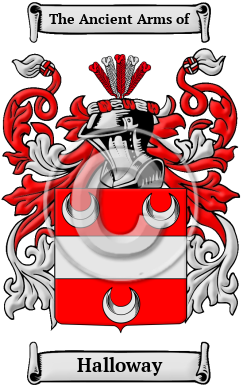 The Anglo-Saxon name Halloway comes from the family having resided as inhabitants at the hollow-way or holy way. [1]

Halloway is a topographic surname, which was given to a person who resided near a physical feature such as a hill, stream, church, or type of tree. Habitation names form the other broad category of surnames that were derived from place-names.

Early Origins of the Halloway family

The surname Halloway was first found in Middlesex at Holloway, a district in the parish of Islington, Finsbury division of the hundred of Ossulstone. [3]

Early History of the Halloway family

Halloway has been spelled many different ways. Before English spelling became standardized over the last few hundred years, spelling variations in names were a common occurrence. As the English language changed in the Middle Ages, absorbing pieces of Latin and French, as well as other languages, the spelling of people's names also changed considerably, even over a single lifetime. Spelling variants included: Holloway, Hollway, Holoway, Hollaway, Hollywood and others.

Notables of this surname at this time include: James Holloway (died 1684), an English merchant from Bristol, and conspirator of the Rye House Plot. John Holloway (c. 1666-1734), was a politician and lawyer in the British colony of Virginia, Speaker of the House of Burgesses (1720-1734) and first Mayor of Williamsburg, Virginia (1722-1723.) Benjamin Holloway (1691?-1759), was an English divine, born at Stony Stratford, Buckinghamshire, about 1691, was the son of Joseph Holloway, 'brasiator' (maltster), of that town. [2] James Holloway (d. 1684), was an English "conspirator, a citizen of Bristol, probably imbibed strong protestant opinions from the master to whom he was apprenticed...
Another 152 words (11 lines of text) are included under the topic Early Halloway Notables in all our PDF Extended History products and printed products wherever possible.

In the United States, the name Halloway is the 11,064th most popular surname with an estimated 2,487 people with that name. [8]

Migration of the Halloway family to Ireland

Some of the Halloway family moved to Ireland, but this topic is not covered in this excerpt.
Another 193 words (14 lines of text) about their life in Ireland is included in all our PDF Extended History products and printed products wherever possible.

Halloway migration to the United States +

In an attempt to escape the chaos experienced in England, many English families boarded overcrowded and diseased ships sailing for the shores of North America and other British colonies. Those families hardy enough, and lucky enough, to make the passage intact were rewarded with land and a social environment less prone to religious and political persecution. Many of these families became important contributors to the young colonies in which they settled. Early immigration and passenger lists have documented some of the first Halloways to arrive on North American shores:

Halloway Settlers in United States in the 19th Century

Halloway Settlers in West Indies in the 17th Century

Historic Events for the Halloway family +