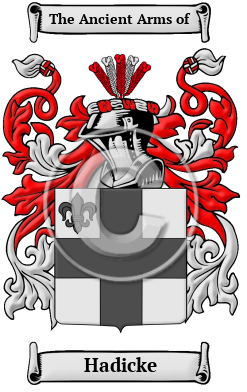 The ancient history of the Hadicke name begins with the ancient Anglo-Saxon tribes of Britain. The name is derived from when the family resided in the settlement of Haydock in the parish of Winwick in Lancashire. The name, pronounced Haddock, belongs to the large category of Anglo-Saxon habitation names, which are derived from pre-existing names for towns, villages, parishes, or farmsteads.

Early Origins of the Hadicke family

The surname Hadicke was first found in Lancashire at Haydock, a township, in the parish of St. Thomas in Ashton-in-Makerfield, union of Warrington, hundred of West Derby. "The manor was held jointly by the families of Holland and Haydock, so long as the former had any estates in Lancashire. In the reign of Edward III., Gilbert de Eydock, or Haidoc, had a licence for imparking Haydock; and from this feudal proprietor descended Sir Gilbert de Haydock, whose daughter and heiress married Sir Peter Legh, of Lyme, ancestor of Thomas Legh, Esq., of Lyme Hall, Cheshire, the present lord of the manor and owner of the whole property. " [1]

Early History of the Hadicke family

Until quite recently, the English language has lacked a definite system of spelling rules. Consequently, Anglo-Saxon surnames are characterized by a multitude of spelling variations. Changes in Anglo-Saxon names were influenced by the evolution of the English language, as it incorporated elements of French, Latin, and other languages. Although Medieval scribes and church officials recorded names as they sounded, so it is common to find one person referred to by several different spellings of his surname, even the most literate people varied the spelling of their own names. Variations of the name Hadicke include Haydock, Haddock, Hadock and others.

Notables of this surname at this time include: William Haydock (d. 1537), a monk of the Cistercian abbey of Whalley in Lancashire, a younger son of William Haydock of Cottam Hall, near Preston, Lancashire. [6] Richard Haydock or Haddock (1552?-1605), was an English Roman Catholic divine, born about 1552, the second son of Vivian Haydock, Esq., of Cottam Hall, near Preston, Lancashire. Richard Haydock (fl. 1605), was an English physician, born at Grewel in Hampshire. He was educated at Winchester College, and on 12 July 1588 matriculated at New College, Oxford, of which he was elected a fellow in 1590. [6] Roger Haydock...
Another 106 words (8 lines of text) are included under the topic Early Hadicke Notables in all our PDF Extended History products and printed products wherever possible.

Migration of the Hadicke family to Ireland

Some of the Hadicke family moved to Ireland, but this topic is not covered in this excerpt.
Another 92 words (7 lines of text) about their life in Ireland is included in all our PDF Extended History products and printed products wherever possible.

Migration of the Hadicke family

Searching for a better life, many English families migrated to British colonies. Unfortunately, the majority of them traveled under extremely harsh conditions: overcrowding on the ships caused the majority of the immigrants to arrive diseased, famished, and destitute from the long journey across the ocean. For those families that arrived safely, modest prosperity was attainable, and many went on to make invaluable contributions to the development of the cultures of the new colonies. Research into the origins of individual families in North America revealed records of the immigration of a number of people bearing the name Hadicke or a variant listed above: Henry Haddock who settled in New England in 1805; William Haddock settled in New England in 1740; Henry, James, and Joseph Haddock arrived in Philadelphia between 1805 and 1840..