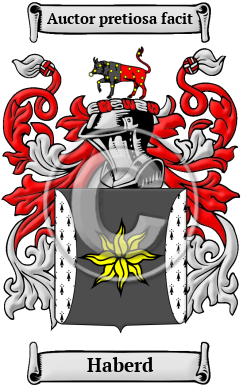 Haberd is an ancient Anglo-Saxon surname that came from the baptismal name Hubert. [1] As the naming tradition grew in Europe baptismal names began to be introduced in many countries. Baptismal names were sometimes given in honour of Christian saints and other biblical figures. There are very few Christian countries in Europe that did not adopt surnames from these religious figures.

However, another source claims the name could have been a nickname "from the small Falcon or Hawk so called (Old French hobert, a hobby, hawk)." [2]

Early Origins of the Haberd family

The surname Haberd was first found in Norfolk as "Hubbard is a characteristic Norfolk name. The early form of the name in this and the neighbouring counties, both in Domesday times and in the centuries immediately following, was Hubert, occasionally written Huberd; and we find that Robert Hubert or Hoberd was rector of Seaming at the close of the 14th century." [3]

Over in Yorkshire, the Yorkshire Poll Tax Rolls of 1379 listed: Petrus Hubard; Alicia Hubard; Isabella Hoberd; and William Hoberd as all residing there at that time.

"The Visitation of Essex (1541) gives the surname of the family of Huberd indiscriminately as Huberd, Hobert, Hubert, and Hobart. Memorials of a family spelt indifferently Hubbard or Hobart are (or were) to be found in Little Plumstead Church, Norfolk." [1]

Some of the family did migrate to Scotland, but much later on and in small numbers: "Patrick Hobart, was burgess of Dundee in 1649." [4]

Early History of the Haberd family

The English language only became standardized in the last few centuries; therefore, spelling variations are common among early Anglo-Saxon names. As the form of the English language changed, even the spelling of literate people's names evolved. Haberd has been recorded under many different variations, including Hobart, Habart, Habbard, Hobert and others.

Notables of this surname at this time include: Sir James Hobart (d. 1507) of Monks Eleigh, Suffolk, Attorney General during the reign of King Henry VII. , He was the youngest son of Thomas Hobart of Leyham in Norfolk. [5] Sir Henry Hobart, 1st Baronet SL (c. 1560-1625), of Blickling Hall, an English judge and politician. He was Chief Justice of the Common Pleas, from a family long settled in Norfolk and Suffolk, was great-grandson of Sir James Hobart. [q. v.]. He was the son of Thomas Hobart of Plumstead, Norfolk. [5] He would establish the first of the two baronetcies for the Hobart...
Another 110 words (8 lines of text) are included under the topic Early Haberd Notables in all our PDF Extended History products and printed products wherever possible.

Migration of the Haberd family to Ireland

Some of the Haberd family moved to Ireland, but this topic is not covered in this excerpt.
Another 34 words (2 lines of text) about their life in Ireland is included in all our PDF Extended History products and printed products wherever possible.

Migration of the Haberd family

For many English families, the political and religious disarray that shrouded England made the far away New World an attractive prospect. On cramped disease-ridden ships, thousands migrated to those British colonies that would eventually become Canada and the United States. Those hardy settlers that survived the journey often went on to make important contributions to the emerging nations in which they landed. Analysis of immigration records indicates that some of the first North American immigrants bore the name Haberd or a variant listed above: Edmund Hobart settled in Charleston in 1630; Joshua, Jeremiah, Peter, Sarah, and Thomas Hobart settled in Boston in 1635.