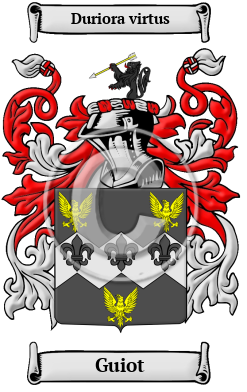 Guiot is a name of ancient Norman origin. It arrived in England with the Norman Conquest of 1066. Guiot is a name that comes from Guyat, a pet form of the Old French given name Guy.

Early Origins of the Guiot family

The surname Guiot was first found in Sussex though the name "has gone through the various forms of Wyat, Wiat, Wyot, and Guyot, or Guiot. The last-named three are used indifferently in the time of King John, and clearly prove the derivation of the name as a diminutive, from the Norman-French personal name Gui or Guido, which we have also received in the form of Guy. The name Guyatt is still found in West Sussex." [1]

There are scat records of the name in Scotland as Black notes "Maucolum Wyet of county Anegos rendered homage, 1296. Nothing more is known of him. " [2]

The Hundredorum Rolls of 1273 proved the widespread use of the name both as a forename and surname: Ayote uxor Wyot, Shropshire; Henry Wyot, Cambridgeshire; Wyott le Carpentier, Buckinghamshire; and Wyot de Dudelebury in Shropshire. [3]

Early History of the Guiot family

Before the advent of the printing press and the first dictionaries, the English language was not standardized. Sound was what guided spelling in the Middle Ages, so one person's name was often recorded under several variations during a single lifetime. Spelling variations were common, even among the names of the most literate people. Known variations of the Guiot family name include Wyatt, Wyat and others.

Outstanding amongst the family at this time was Sir Henry Wyatt (1460-1537), an English courtier from Yorkshire; and his son, Sir Thomas Wyatt (1503-1542), an early English language poet and statesman, knighted by Henry VIII in 1536; Sir Thomas Wyatt the Younger (1521-1554), an English rebel leader during the reign of Mary I of England; his rising is traditionally called "Wyatt's rebellion"; George...
Another 63 words (4 lines of text) are included under the topic Early Guiot Notables in all our PDF Extended History products and printed products wherever possible.

To escape the political and religious chaos of this era, thousands of English families began to migrate to the New World in search of land and freedom from religious and political persecution. The passage was expensive and the ships were dark, crowded, and unsafe; however, those who made the voyage safely were encountered opportunities that were not available to them in their homeland. Many of the families that reached the New World at this time went on to make important contributions to the emerging nations of the United States and Canada. Research into various historical records has revealed some of first members of the Guiot family to immigrate North America:

Guiot Settlers in Canada in the 17th Century