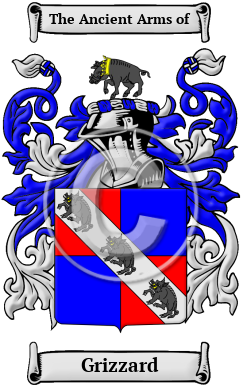 Early Origins of the Grizzard family

The surname Grizzard was first found in Norfolk where conjecturally they were, in 1066, Lords of the Manor of Brockdish, the King's land, whose feudal Lord was William de Noyers, Count of Nevers seated originally at Poitevin and St-Cyr de Nevers in Normandy. Sir William also held Grayhurst Manor through Bishop Odo from King William of Normandy. From this family also descend the Lords Monson and Viscounts Castlemaine. The original estates were sold in 1327. The village now consists of a church, St. Edmunds, which has both Saxon and Norman windows, obviously predating the Norman Conquest by many years.

Early History of the Grizzard family

This web page shows only a small excerpt of our Grizzard research. Another 149 words (11 lines of text) covering the years 1555 and 1651 are included under the topic Early Grizzard History in all our PDF Extended History products and printed products wherever possible.

More information is included under the topic Early Grizzard Notables in all our PDF Extended History products and printed products wherever possible.

In the United States, the name Grizzard is the 14,610th most popular surname with an estimated 2,487 people with that name. [4]

Migration of the Grizzard family to Ireland

Some of the Grizzard family moved to Ireland, but this topic is not covered in this excerpt.
Another 33 words (2 lines of text) about their life in Ireland is included in all our PDF Extended History products and printed products wherever possible.

Migration of the Grizzard family