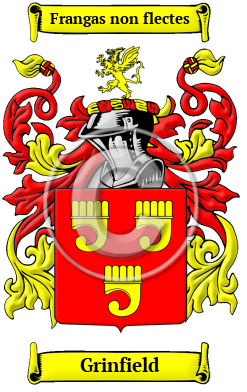 The name Grinfield was brought to England in the wave of migration that followed the Norman Conquest of 1066. The Grinfield family lived in one of the many places named Grenville in Normandy. Grenville was a seaport in Lower Normandy. [1]

There are also many places in Normandy called Grainville, which is a place-name derived from the Germanic personal name Guarin, which means guard, and the Old French word ville, which means village or settlement. [2]

Early Origins of the Grinfield family

The surname Grinfield was first found in Buckinghamshire, where they descend from Richard de Grenville who came with the Conqueror in the train of Walter Giffard, Earl of Longeville and Buckingham. He was son in law of Giffard. [3]

Cornwall and Devon is home to the family too as George Grenville of Stowe stated in 1711 in a letter to his nephew: "Your ancestors for at least five hundred years never made any alliances, male of female, out of the western counties: thus there is hardly a gentleman either in Cornwall or Devon, but has some of you blood, as you of theirs."

Here is another account of the family's origin: "The ancient and noble family of Grenville of Stow in Kilkhampton, so much renowned in Cornwall, came into England with William the Conqueror. Richard de Grenville, who first visited this country, and who was a military officer, is said to be a younger brother of Robert Fitzhaman, Earl of Carbill, Lord of Thurigny and Granville in France and Normandy, and to have lineally descended from Rollo Duke of Normandy. Richard de Grenville, on obtaining a settlement in England, married Isabel, daughter of the Earl of Buckingham, and thus became the common ancestor of the Grenvilles in Cornwall, Devonshire, and Buckinghamshire. Those who came into the western parts, took up their primary residence at Bideford, where one of them held three knights' fees in the reign of Henry II. during which period they appear to have had a seat at Stow in Kilkhampton; but at what time this settlement began is very uncertain." [4]

Another source recounts a similar origin: "Richard, surnamed de Grenville, from one of his Lordships, was younger brother of the renowned conqueror of Glamorganshire, Robert Fitz-Hamon, and derived in direct descent from Rollo, the Dane. Accompanying his royal, kinsman to England, he fought at Hastings, and participated in the spoils of victory. He inherited also the Norman honours of his house, and was Earl of Corbeil and Baron of Thorigny and Granville. From him sprang the Granvilles of Stow, in Cornwall, a race of men distinguished in each successive generation, but pre-eminently illustrious in the 16th and 17th centuries, when the achievements of the Granvilles illumine with their brilliancy the page of their country's annals. We can only glance in passing at the heroic death of the gallant Admiral Granville, the friend and relative of Raleigh, and exclaim with John Evelyn, than this, "what have we more? What can be greater?" [5]

"The manor of Treglasta, which lies principally in Alternon, has its site at Treglasta in this parish. The manors of Halwell and Hendraburnick, were held formerly under Launceston Castle. These, with the manor of Tremeal, partly in this parish and partly in that of St. Juliot, were for some time in the Grenville family, from whom they were alienated prior to 1620." [4]

"[The parish of] Kilkhampton, which is rendered famous by the renowned family of Grenville, to whom it gave residence, and for furnishing to the celebrated Mr. Hervey an occasion to write his 'Meditations among the Tombs,' is situated in the northern part of Cornwall, in the deanery of Trigg Major, and in the hundred of Stratton, from which town it is about three miles and a half distant." [4]

"The name continued to be written Grenville until the Earls of Bath, in the seventeenth century, adopted the form of Granville." [6]

Early History of the Grinfield family

Spelling variations in names were a common occurrence in the eras before English spelling was standardized a few hundred years ago. In the Middle Ages, even the literate regularly changed the spellings of their names as the English language incorporated elements of French, Latin, and other European languages. Many variations of the name Grinfield have been found, including Granville, Granfield, Grandfield, Greenfield and many more.

Outstanding amongst the family at this time was Sir Richard Grenville (1542-1591), an English sailor from Bideford, Devon, sea captain and explorer, Sheriff of Cornwall (1576-1577) and Sheriff of Cork; Sir Bevil Grenville (1596-1643), Royalist soldier in the English Civil War, and Member of Parliament; Sir Richard Grenville (Granville) (1600-1658), 1st Baronet, a Cornish Royalist leader during the English Civil War; John Granville, 1st Earl of Bath (1628-1701), English Royalist statesman during the English Civil War, who was made Lord...
Another 80 words (6 lines of text) are included under the topic Early Grinfield Notables in all our PDF Extended History products and printed products wherever possible.

Migration of the Grinfield family to Ireland

Some of the Grinfield family moved to Ireland, but this topic is not covered in this excerpt. More information about their life in Ireland is included in all our PDF Extended History products and printed products wherever possible.

Grinfield migration to the United States +

For many English families, the social climate in England was oppressive and lacked opportunity for change. For such families, the shores of Ireland, Australia, and the New World beckoned. They left their homeland at great expense in ships that were overcrowded and full of disease. Many arrived after the long voyage sick, starving, and without a penny. But even those were greeted with greater opportunity than they could have experienced back home. Numerous English settlers who arrived in the United States and Canada at this time went on to make important contributions to the developing cultures of those countries. Many of those families went on to make significant contributions to the rapidly developing colonies in which they settled. Early North American records indicate many people bearing the name Grinfield were among those contributors:

Grinfield Settlers in United States in the 17th Century