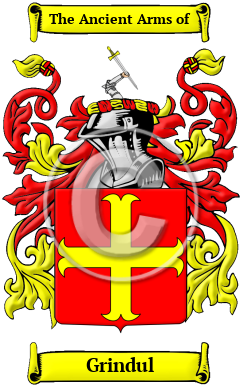 The origins of the Grindul name lie with England's ancient Anglo-Saxon culture. It comes from when the family lived at Grindall, a chapelry, in the parish and union of Bridlington, wapentake of Dickering in the East Riding of Yorkshire. [1] [2] [3] [4] The place name literally means "green valley." [5]

Early Origins of the Grindul family

The surname Grindul was first found in Worcestershire where AEdricus Grendal was listed in the Pipe Rolls of 1180. Other early rolls include: Robert de Grenedala in the Yorkshire Pipe Rolls of 1166; Walter de Grendale in the Feet of Fines for Lincolnshire in 1242; Stephen, Benedict de Grindale in the Assize Rolls for Yorkshire in 1297 and again in the Subsidy Rolls for Cumbria in 1332. [5]

Early History of the Grindul family

This web page shows only a small excerpt of our Grindul research. Another 71 words (5 lines of text) covering the years 1519, 1583, 1536, 1537, 1538 and 1548 are included under the topic Early Grindul History in all our PDF Extended History products and printed products wherever possible.

Before the last few hundred years, the English language had no fast system of spelling rules. For that reason, spelling variations are commonly found in early Anglo-Saxon surnames. Over the years, many variations of the name Grindul were recorded, including Grindall, Grindal, Grindle, Grindell, Grindel and others.

Notables of the family at this time include Edmund Grindal (c.1519-1583), Bishop of London, Archbishop of York and Archbishop of Canterbury. He was "s the son of William Grindal, a well-to-do farmer who lived at Hensingham, in the parish of St. Bees, Cumberland, a district which Grindal himself described as 'the ignorantest part in religion, and most oppressed of covetous landlords of anyone part of this realm'. He went at an early age to Cambridge, where he entered first at Magdalene College, and then removed to Christ's College...
Another 87 words (6 lines of text) are included under the topic Early Grindul Notables in all our PDF Extended History products and printed products wherever possible.

Migration of the Grindul family

To escape oppression and starvation at that time, many English families left for the "open frontiers" of the New World with all its perceived opportunities. In droves people migrated to the many British colonies, those in North America in particular, paying high rates for passages in cramped, unsafe ships. Although many of the settlers did not make the long passage alive, those who did see the shores of North America perceived great opportunities before them. Many of the families that came from England went on to make essential contributions to the emerging nations of Canada and the United States. Research into various historical records revealed some of first members of the Grindul family emigrate to North America: Edward Grindall who settle in Virginia in 1623; Edward Grindall settled in St. Christopher in 1635; Thomas Grindall settle in Virginia in 1639; William GRindall settled in Barbados in 1654.