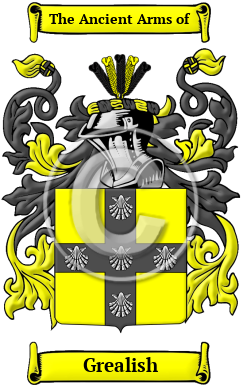 Early Origins of the Grealish family

The surname Grealish was first found in the Domesday Book of 1086 where Albert Greslet was listed as holding lands in Cheshire. [1]

Early History of the Grealish family

Outstanding amongst the family at this time was John Grayle or Graile (1614-1654), English Puritan minister, the son of John Grayle, priest, of Stone, Gloucestershire, where he...
Another 27 words (2 lines of text) are included under the topic Early Grealish Notables in all our PDF Extended History products and printed products wherever possible.

Grealish Settlers in Australia in the 19th Century

Grealish Settlers in New Zealand in the 19th Century