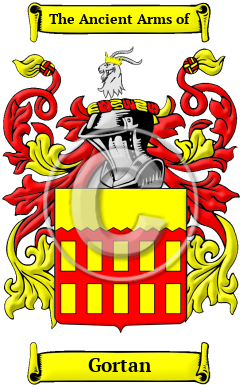 The origins of the Gortan name lie with England's ancient Anglo-Saxon culture. It comes from when the family lived in the region of Gorton, a district in Manchester in Lancashire. [1] The name is a habitational name that was derived from the Old English word gor meaning "dirt" and tun meaning "enclosure." [2]

Early Origins of the Gortan family

The surname Gortan was first found in Greater Manchester at Gorton, a chapelry, in the union of Chorlton, hundred of Salford, historically part of Lancashire. [3] The first record of the family was found in the Subsidy Rolls of Lancashire in 1332 where Thomas de Gorton held lands at that time. [4]

Further to the north in Scotland, the family could have originated in the old barony of Gorton in Midlothian where Edward de Couertone (for Gouertone) was a king's tenant in Edinburghshire. He rendered homage to King Edward I in 1296. Later, Mergaret de Gouiertoun held the lands of Gouiertoun in Loudonia in the reign of David II. [5]

Early History of the Gortan family

This web page shows only a small excerpt of our Gortan research. Another 65 words (5 lines of text) covering the years 1592, 1677 and 1636 are included under the topic Early Gortan History in all our PDF Extended History products and printed products wherever possible.

Before the last few hundred years, the English language had no fast system of spelling rules. For that reason, spelling variations are commonly found in early Anglo-Saxon surnames. Over the years, many variations of the name Gortan were recorded, including Gorton, Gorten, Gortin and others.

Notables of the family at this time include Sir Thomas Gorton of Gorton; Samuel Gorton (1592-1677), English sectary and founder of the American sect of Gortonites which survived until the end of the 18th century. He was " 'born and bred' at Gorton, Lancashire, as also were the 'fathers of his body for many generations.' He came of a good family, and says that his wife 'had bin as tenderly brought up as was any man's wife then in that towne'. He probably knew the Bible by...
Another 87 words (6 lines of text) are included under the topic Early Gortan Notables in all our PDF Extended History products and printed products wherever possible.

Migration of the Gortan family

To escape oppression and starvation at that time, many English families left for the "open frontiers" of the New World with all its perceived opportunities. In droves people migrated to the many British colonies, those in North America in particular, paying high rates for passages in cramped, unsafe ships. Although many of the settlers did not make the long passage alive, those who did see the shores of North America perceived great opportunities before them. Many of the families that came from England went on to make essential contributions to the emerging nations of Canada and the United States. Research into various historical records revealed some of first members of the Gortan family emigrate to North America: John Gorton who settled in Virginia in 1679; Samuel Gorton settled in Boston in 1630; Steven Gorton settled in Virginia in 1635; A. Gorton settled in Baltimore in 1820..