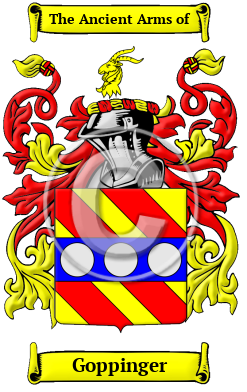 Goppinger is an ancient Norman name that arrived in England after the Norman Conquest of 1066. The Goppinger family lived in Suffolk which is derived from the Old English copp, a word for the top or summit of a hill, and indicates someone who lived in such a place. Another reference presumes that the name was derived from the word "coppin," which was a "piece of yarn taken from a spindle." [1] The Suffolk expression "To live like a Coppinger, points to the wealth and hospitality of a family of this name who flourished in the 16th and 17th century at Buxhall." [1]

Early Origins of the Goppinger family

The surname Goppinger was first found in Suffolk where they held a family seat from very early times. Records from the year 1290 showed Greffrey Coppinger and Walter Coppinger in Waketown, Norfolk. Roger Coppinger of Waketun is listed in Norfolk in that same era, in the Rotuli Hundredorum. Other early records of the name include Seman Copinger, listed in the Subsidy Rolls of Suffolk in 1327; William Copenger listed in the Feet of Fines of Suffolk in 1383; and William Copynger, listed in the Feet of Fines of Essex in 1489. [2]

Early History of the Goppinger family

Norman surnames are characterized by a multitude of spelling variations. The frequent changes in surnames are largely due to the fact that the Old and Middle English languages lacked definite spelling rules. The introduction of Norman French to England, as well as the official court languages of Latin and French, also had pronounced influences on the spelling of surnames. Since medieval scribes and church officials recorded names as they sounded, rather than adhering to any specific spelling rules, it was common to find the same individual referred to with different spellings. The name has been spelled Coppinger, Coppenger, Copenger, Copinger, Coppynger, Copinsher and many more.

Notables of this surname at this time include: William Copinger (d. 1436), who became the parson (rector) of Buxhall in 1416. He was a member of a family settled at Buxhall, Suffolk. His will is dated 20 Jan. 1411-1412, and was proved on 2 March 1415-1416. He was buried at Buxhall. [3] Sir Ralph Copinger, of Suffolk, was knighted on the battlefield at on Muckleburgh, in 1547, fighting against the Scots. John Coppin or Copping (d. 1583), was a Brownist, who lived in Bury St. Edmunds. He enthusiastically accepted the teachings of Robert Browne; preached Browne's doctrines in his native town...
Another 195 words (14 lines of text) are included under the topic Early Goppinger Notables in all our PDF Extended History products and printed products wherever possible.

Migration of the Goppinger family to Ireland

Some of the Goppinger family moved to Ireland, but this topic is not covered in this excerpt.
Another 65 words (5 lines of text) about their life in Ireland is included in all our PDF Extended History products and printed products wherever possible.

Migration of the Goppinger family

Many English families emigrated to North American colonies in order to escape the political chaos in Britain at this time. Unfortunately, many English families made the trip to the New World under extremely harsh conditions. Overcrowding on the ships caused the majority of the immigrants to arrive diseased, famished, and destitute from the long journey across the stormy Atlantic. Despite these hardships, many of the families prospered and went on to make invaluable contributions to the development of the cultures of the United States and Canada. Early North American immigration records have revealed a number of people bearing the name Goppinger or a variant listed above: Matthew Coppinger, who arrived in Barbados in 1675; John Coppinger who came to Barbados in 1680; a Mrs. Copinsher, who arrived in Boston in 1744; James Copinger, who arrived in Philadelphia in 1808.