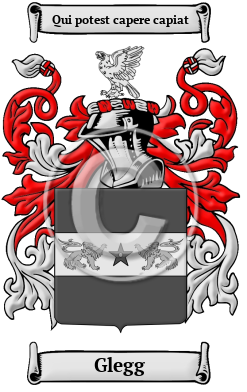 The origins of the Glegg name lie with England's ancient Anglo-Saxon culture. It comes from when the family lived in Cheshire at Gayton. "The Gleggs of Gayton were an ancient and distinguished family, now mostly represented amongst the gentry." [1] Black notes that "the name Glegg, Gleig, or Glyge is traditionally of French origin, but no evidence is produced in support of the statement." [2] The author continues "the first of the family of whom we have any authentic record is Adam Glyge mentioned on a tombstone in Marykirk, 1698."

Early Origins of the Glegg family

The surname Glegg was first found in Cheshire at Gayton, a township, in the parish of Heswall, union, and Lower division of the hundred, of Wirrall. "The manor was given by Edward I. to Reginald de Tibermont of Normandy, who having soon after surrendered it into the king's hands, it was granted in 1277 to the convent of Vale Royal. In 1312 the abbot gave it to Stephen de Merton in part exchange of his manor of Merton, in the forest of Delamere; and about 1330, Gayton passed by marriage with his heiress into the family of Glegg. William III. slept at Gayton Hall, the ancient seat of the Gleggs, in June 1689, previously to embarking for Ireland." [3] [4] A few years later the aforementioned Scottish record was found and it was hear that it may have derived as a nickname from the Scottish "gleg", as in "quick of perception, keen, clever, expeditious." [5] The same source includes a quote from "Scott in the Antiquary who makes his old 'blue-gown' say:-'I was aye gleg at my duty-naebody ever catched Edie sleeping.'" [5]

Early History of the Glegg family

This web page shows only a small excerpt of our Glegg research. Another 82 words (6 lines of text) covering the years 1731, 1622, 1655, 1656 and 1636 are included under the topic Early Glegg History in all our PDF Extended History products and printed products wherever possible.

Before the last few hundred years, the English language had no fast system of spelling rules. For that reason, spelling variations are commonly found in early Anglo-Saxon surnames. Over the years, many variations of the name Glegg were recorded, including Glegg, Glegge, Gelgges, Gleggs and others.

Distinguished members of the family include Edward Glegg (b. 1622) of Caldey Grange who purchased in 1655 and 1656 the manor of Irbie in Cheshire. William Glegg was the founder of...
Another 30 words (2 lines of text) are included under the topic Early Glegg Notables in all our PDF Extended History products and printed products wherever possible.

Glegg migration to the United States +

To escape oppression and starvation at that time, many English families left for the "open frontiers" of the New World with all its perceived opportunities. In droves people migrated to the many British colonies, those in North America in particular, paying high rates for passages in cramped, unsafe ships. Although many of the settlers did not make the long passage alive, those who did see the shores of North America perceived great opportunities before them. Many of the families that came from England went on to make essential contributions to the emerging nations of Canada and the United States. Research into various historical records revealed some of first members of the Glegg family emigrate to North America:

Glegg Settlers in United States in the 19th Century