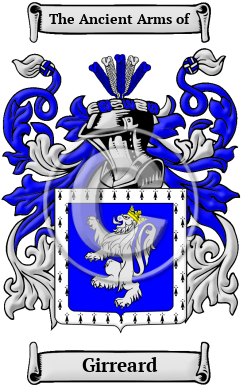 The name Girreard is of Anglo-Saxon origin and came from the son of Gerard. The surname Girreard was originally derived from the Old German Gerhard which meant spear-brave. [1]

Early Origins of the Girreard family

The surname Girreard was first found in the Domesday Book of 1086 where the Latin form Gerardus and Girardus were listed. [2] The Latin form prevailed into the next century when Gerardus was listed in Norfolk in 1134-1140, and in 1149-1162 in Lincolnshire. [1]

Early History of the Girreard family

Before English spelling was standardized a few hundred years ago, spelling variations of names were a common occurrence. Elements of Latin, French and other languages became incorporated into English through the Middle Ages, and name spellings changed even among the literate. The variations of the surname Girreard include Gerrard, Gerard, Jarrard, Jared, Garrad, Garred, Jarratt, Jarrett and many more.

Migration of the Girreard family