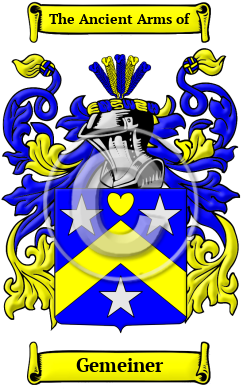 Early Origins of the Gemeiner family

The surname Gemeiner was first found in Normandy (French: Normandie), the former Duchy of Normandy, where the family has been a prominent family for centuries, and held a family seat with lands and manor. The family were well established in the region of Calvados at that time.

Geoffrey Gaimar (fl. 1140?), wrote a history of England in French verse, extending from the time of King Arthur's successors to the death of William II. "His errors in interpreting the 'Anglo-Saxon Chronicle Chronicle,' on which most of his history is based, render it probable that he was a Norman by birth, and he may have derived his name from a suburb of Caen, anciently known as Gaimara, and now Gémare. " [1]

Early History of the Gemeiner family

This web page shows only a small excerpt of our Gemeiner research. Another 84 words (6 lines of text) covering the years 181 and 1813 are included under the topic Early Gemeiner History in all our PDF Extended History products and printed products wherever possible.

More information is included under the topic Early Gemeiner Notables in all our PDF Extended History products and printed products wherever possible.

Migration of the Gemeiner family