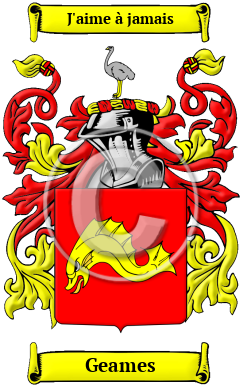 "The first appearance of this Christian name in our annals is in the Domesday [Book]." [2]

James the Cistercian (fl. 1270), also called James the Englishman, "was the first professor of philosophy and theology in the college which Stephen Lexington, Abbot of Clairvaux, founded in the house of the counts of Champagne at Paris for the instruction of young Cistercians. " [3]

Early Origins of the Geames family

The surname Geames was first found in Surrey. At an early time the name migrated from Normandy under the name FitzJames, as one of the noble house of Normandy. In nearby Utrecht the name became Van Haestrecht, whence it became FitzJames again, having migrated from Utrecht into England, into the manor of Ightham, at the time of King John, about the year 1210 A.D. They acquired the manors and estates of Hamon de Cravignuier, from De Inge, Zouch of Harringworth, Read, and Willoughby, and thence to the noble house of James.

"In early documents the name is usually Jacobus, but James is occasionally found in the 12th and 13th centuries, sometimes alternating with Jack or its diminutives Jackamin, Jackett and Jacklin." [4]

"The principal home of this name is in South Wales and Monmouthshire. Lower tells us of a very ancient Pembroke family possessing an estate successively held by thirteen persons bearing the name of William James. [2] The name is also frequent in Shropshire and Herefordshire on the Welsh border, and in the neighbouring counties of Gloucester and Stafford. It is also numerous in the south - west of England, especially in Somerset, Dorset, and Cornwall. In the eastern counties it nearly disappears, but it reappears in the north, though in no great numbers. " [5]

Early History of the Geames family

It is only in the last few hundred years that the English language has been standardized. For that reason, Anglo-Norman surnames like Geames are characterized by many spelling variations. Scribes and monks in the Middle Ages spelled names they sounded, so it is common to find several variations that refer to a single person. As the English language changed and incorporated elements of other European languages such as Norman French and Latin, even literate people regularly changed the spelling of their names. The variations of the name Geames include James, Fitzjames, St. James, Jaimes, Geames and many more.

Migration of the Geames family to Ireland

Some of the Geames family moved to Ireland, but this topic is not covered in this excerpt. More information about their life in Ireland is included in all our PDF Extended History products and printed products wherever possible.

Migration of the Geames family

Faced with the chaos present in England at that time, many English families looked towards the open frontiers of the New World with its opportunities to escape oppression and starvation. People migrated to North America, as well as Australia and Ireland in droves, paying exorbitant rates for passages in cramped, unsafe ships. Many of the settlers did not make the long passage alive, but those who did see the shores of North America were welcomed with great opportunity. Many of the families that came from England went on to make essential contributions to the emerging nations of Canada and the United States. Some of the first immigrants to cross the Atlantic and come to North America carried the name Geames, or a variant listed above: Edmund James, who settled in Salem Massachusetts in 1630; Blanch James, a servant sent to Barbados in 1658; David James, who came to Nevis in 1661; Abel James, who arrived in Maryland in 1670.