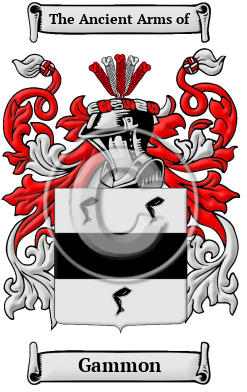 The Gammon surname is derived from the Anglo-Norman French word "gambon," meaning "ham," which comes ultimately from a Norman-Picard form of the Old French "jambe" meaning "leg."

Early Origins of the Gammon family

The surname Gammon was first found in the Hundredorum Rolls of 1273 where John le Gamone, or le Gamene, was found in Southamptonshire; William Gamen, in Suffolk; Geoffrey Gamon, in Oxfordshire and Richard Gamen in Norfolk. [1] All held land at that time.

Early History of the Gammon family

Notable amongst the family at this time was James Gammon (fl. 1660-1670), English engraver, known by a few works, which, though they possess little merit as engravings, are valued for their rarity. They are for the most part poor copies of better known engravings. Gammon resided in London, and was employed by the booksellers. Among his engravings were portraits of James I, Charles I, Charles II, Catherine of Braganza, James, duke of York, Henry, duke of Gloucester, Mary, princess of Orange, Duke and Duchess of Monmouth, Richard Cromwell, George Monck, Duke of...
Another 92 words (7 lines of text) are included under the topic Early Gammon Notables in all our PDF Extended History products and printed products wherever possible.

In the United States, the name Gammon is the 5,065th most popular surname with an estimated 4,974 people with that name. [3]

Migration of the Gammon family to Ireland

Some of the Gammon family moved to Ireland, but this topic is not covered in this excerpt. More information about their life in Ireland is included in all our PDF Extended History products and printed products wherever possible.

Gammon migration to the United States +

Gammon Settlers in United States in the 17th Century

Gammon Settlers in United States in the 18th Century

Gammon Settlers in United States in the 19th Century

Gammon Settlers in Canada in the 18th Century

Gammon Settlers in Canada in the 19th Century

Gammon Settlers in Australia in the 19th Century

Gammon Settlers in New Zealand in the 19th Century

Historic Events for the Gammon family +