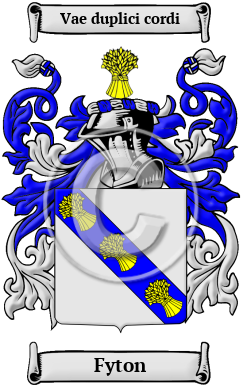 The ancestors of the name Fyton date back to the Anglo-Saxon tribes of Britain. The name is derived from when the Fyton family lived in Fitton Hall, in Cambridgeshire. [1] The place-name shows the mark of the Danish influence on England before the Middle Ages. Fitton is derived from the Old Norse word fit, which means field, and the Old English word tun, for farm or fort. It literally means "fort among the fields," and was probably the site of a Danish army camp sometime in the 9th to 10th centuries. [2]

Early Origins of the Fyton family

The surname Fyton was first found in at Rufford, Lancashire which was an early homestead of the family. "A moiety of this manor appears to have been granted in the reign of Henry I., by Richard Bussel, the second Baron of Penwortham, to Richard Fitun or Fitton. John Fitton, his great-grandson, was also lord of half of Rufford; and the grandson of the latter, by a charter without date, gave the moiety of the town to his daughter Matilda, or Maud. This Matilda married Sir William Hesketh; and by the marriage of Sir William's grandson with the heiress of Edmund Fitton, lord of half Rufford, he became sole lord of the manor, which has since been vested in his descendants. " [3]

"Fitton is an ancient Lancashire name now mostly characteristic of the district of Bury. The Fittons were lords of Great Harwood in the 12th and 13th centuries; and in fact in that early period the name occurred in various forms in the extensive parish of Whalley, such as, Fittun, Fitun, Fitton, Fyton, Phiton, Phitun, etc.: Roger Fitton of Martholm, Harwood, gave a bell to Stanlaw Abbey, apparently in the 16th century (W. W. and A.). The Cheshire Fittons are referred to under that county." [4]

Early feudal rolls provided the king of the time a method of cataloguing holdings for taxation, but today they provide a glimpse into the wide surname spellings in use at that time. Richard ffyton was listed in Lancashire in 1188; Richard Fitun was found in the Pipe Rolls for Warwickshire in 1195; and Alan de Fittun was listed in Cheshire c. 1213. [1]

Early History of the Fyton family

It is only in the last few hundred years that the English language has been standardized. For that reason, early Anglo-Saxon surnames like Fyton are characterized by many spelling variations. As the English language changed and incorporated elements of other European languages, even literate people changed the spelling of their names. The variations of the name Fyton include: Fitton, Fiton, Fytton, Fyton and others.

Distinguished members of the family include Sir Edward Fitton, 1st Baronet (1572-1619); and Sir Edward Fitton (1603-1643), 2nd Baronet, of Gawsworth Hall Cheshire, who died without issue. He had seven sisters but the nearest male was his father. His estates were contested for years, but in the end they were lost from the family. Mary Fitton ( fl. 1600), was Maid of honour to Queen Elizabeth, and alleged to be 'the dark lady' mentioned in Shakespeare's sonnets. She was the fourth child and second daughter of Sir Edward Fitton the younger [see above], by his wife, Alice, daughter of Sir John Holcroft. She...
Another 145 words (10 lines of text) are included under the topic Early Fyton Notables in all our PDF Extended History products and printed products wherever possible.

Migration of the Fyton family to Ireland

Some of the Fyton family moved to Ireland, but this topic is not covered in this excerpt.
Another 95 words (7 lines of text) about their life in Ireland is included in all our PDF Extended History products and printed products wherever possible.

Migration of the Fyton family

Many English families tired of political and religious strife left Britain for the new colonies in North America. Although the trip itself offered no relief - conditions on the ships were extremely cramped, and many travelers arrived diseased, starving, and destitute - these immigrants believed the opportunities that awaited them were worth the risks. Once in the colonies, many of the families did indeed prosper and, in turn, made significant contributions to the culture and economies of the growing colonies. An inquiry into the early roots of North American families has revealed a number of immigrants bearing the name Fyton or a variant listed above: William Fitton who settled in Barbados in 1683; Edmund, John, and R.G.M. Fitton settled in Pennsylvania between 1844 and 1873; Isaac and William Fitton settled in Baltimore, Maryland in 1823..