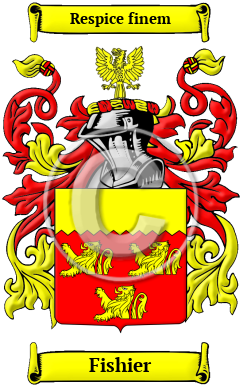 Fishier is an ancient Norman name that arrived in England after the Norman Conquest of 1066. It is a name for a person who worked as a fisherman. Looking back even further, we found the name was originally derived from the Old English word fischer. [1]

"This seems to be a sufficiently obvious derivation from the calling of a fisherman, especially since ' fisher ' occurs in our version of the New Testament in this sense; and Leland in his Itinerary usually describes the smaller sea-coast places as "fischar tounes." In Domesday [Book] and other early records, we meet with the forms Piscator, Le Pecheur, etc." [2]

"In the time of King Stephen the family of Fitz-Urse (a name which in after days degenerated into Fitzour, Fyshour, and Fisher) became possessed of the great manor of Williton; they had their descent from that Urso, or Ursus, who in the time of William the Conqueror held lands in Grittleton, and other parts of Wiltshire, of the Abbey of Glastonbury. The first of the name who enjoyed this manor was Richard Fitz Urse, who died about 14 Hen. II., leaving issue three sons ; Sir Reginald, Sir Robert, and Walter. Sir Reginald, the eldest, had his residence at Williton, in a house which he afterwards gave to his brother Robert, with a moiety of this manor. This Sir Reginald was among the courtiers standing in the presence chamber at Bur, near Bayeux, a few days before Christmas 1170, when the King gave audience to the three prelates that had been excommunicated by Thomas a Beckett, and came to lay their complaint before him." [3]

Early Origins of the Fishier family

In early records the name was often listed in Latin as "piscator" as seen by this record found in Scotland: Robert dominus Piscator, burgess of Perth, 1292. The Latin version quickly deferred to a more English version when "Michael Fysser who appears in record in 1344 as bailie of Perth is probably the Michaele Fisser recorded in 1338. " [5]

Early History of the Fishier family

Before the last few hundred years the English language had no fixed system of spelling rules. For that reason, spelling variations occurred commonly in Anglo Norman surnames. Over the years, many variations of the name Fishier were recorded, including Fisher, Fischer and others.

Outstanding amongst the family at this time was Sir Thomas Fisher; Sir Robert Fisher, 1st Baronet of Great Packington, Warwickshire; and his son, Sir Clement Fisher, 2nd Baronet (1613-1683), an English politician, Member of Parliament for Coventry (1661); Samuel Fisher (1605-1665) was an English Quaker controversialist from Northampton; Payne Fisher (1616-1693), an English...
Another 53 words (4 lines of text) are included under the topic Early Fishier Notables in all our PDF Extended History products and printed products wherever possible.

Migration of the Fishier family to Ireland

Some of the Fishier family moved to Ireland, but this topic is not covered in this excerpt.
Another 57 words (4 lines of text) about their life in Ireland is included in all our PDF Extended History products and printed products wherever possible.

Migration of the Fishier family

The unstable environment in England at this time caused numerous families to board ships and leave in search of opportunity and freedom from persecution abroad in places like Ireland, Australia, and particularly the New World. The voyage was extremely difficult, however, and only taken at great expense. The cramped conditions and unsanitary nature of the vessels caused many to arrive diseased and starving, not to mention destitute from the enormous cost. Still opportunity in the emerging nations of Canada and the United States was far greater than at home and many went on to make important contributions to the cultures of their adopted countries. An examination of many early immigration records reveals that people bearing the name Fishier arrived in North America very early: Edward Fisher who settled in Virginia in 1623; Gabriel Fisher settled in Virginia in 1635; Henry Fisher settled in Virginia in 1623 with his wife and children.