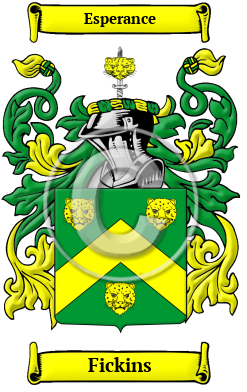 The name Fickins is rooted in the ancient Anglo-Saxon culture. It was a name for someone who was a person of iron point which may have been made in reference to a soldier or warrior. The surname Fickins originally derived from the Old English word Fiche which referred to iron point. One source claims that the name could have been Norman in origin from "Fitz or Le Fils." [1]

Early Origins of the Fickins family

The surname Fickins was first found in Essex where "the name has long been established." [6] However, the Hundredorum Rolls of 1273 list scattered listings of the family by that time: Gilbert Fiz in Cambridgeshire; Walter Fiz in Bedfordshire; and William Fiz in Somerset. [7]

Early History of the Fickins family

Fickins has been spelled many different ways. Before English spelling became standardized over the last few hundred years, spelling variations in names were a common occurrence. As the English language changed in the Middle Ages, absorbing pieces of Latin and French, as well as other languages, the spelling of people's names also changed considerably, even over a single lifetime. Many variations of the name Fickins have been found, including Fitch, Fitchett, Fitchitt, Fittch, Fitche, Fitchet, Fitchit, Fitz, Fitts and many more.

Notables of this surname at this time include: Ralph Fitch ( fl. 1583-1606), English traveller in India, who "was among the first Englishmen known to have made the overland route down the Euphrates Valley towards India. He left London on 12 Feb. 1583 with other merchants of the Levant Company, among whom were J. Newberry, J. Eldred, W. Leedes, jeweller, and J. Story, a painter. How far Fitch's travels and experience in the East may have contributed to the establishment of...
Another 79 words (6 lines of text) are included under the topic Early Fickins Notables in all our PDF Extended History products and printed products wherever possible.

Migration of the Fickins family to Ireland

Some of the Fickins family moved to Ireland, but this topic is not covered in this excerpt.
Another 67 words (5 lines of text) about their life in Ireland is included in all our PDF Extended History products and printed products wherever possible.

Migration of the Fickins family

In an attempt to escape the chaos experienced in England, many English families boarded overcrowded and diseased ships sailing for the shores of North America and other British colonies. Those families hardy enough, and lucky enough, to make the passage intact were rewarded with land and a social environment less prone to religious and political persecution. Many of these families became important contributors to the young colonies in which they settled. Early immigration and passenger lists have documented some of the first Fickinss to arrive on North American shores: Matthew Fitch who settled in Virginia in 1606; fourteen years before the "Mayflower"; Enecha Fitch who purchased land in Virginia in 1624; James and Abigail Fitch who landed in Boston in 1635.