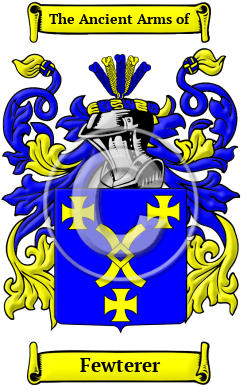 The Fewterer surname was no doubt taken on by someone who either lived in or near a forest, or perhaps worked in the forest. The Middle English word "forest" referred specifically to an area of woodland reserved by law as hunting grounds for the king or his nobles. No doubt, as a surname, Fewterer would have appeared independently in various parts of Britain.

Early Origins of the Fewterer family

The surname Fewterer was first found in Northumberland, but early records include John Forester, listed in the Pipe Rolls of Surrey of 1183, and Richard le Forester listed in the Feet of Fines of Essex in 1240. [3]

Early History of the Fewterer family

During the era when a person's name, tribe and posterity was one of his most important possessions, many different spellings were found in the archives examined. Fewterer occurred in many references, and spelling variations of the name found included Forrester, Forester, Forrest, Forster, Foster, Forrestor and many more.

Notable amongst the family name during their early history was John Forrest (1471-1538), English friar and martyr; Francis Forester (b. 1623) was High Sheriff of Shropshire in 1652; Sir William Forester (1655-1718), of Dothill in Wellington, Shropshire, Member of Parliament for the borough constituency of Wenlock (1679 to his death)...
Another 49 words (4 lines of text) are included under the topic Early Fewterer Notables in all our PDF Extended History products and printed products wherever possible.

Migration of the Fewterer family to Ireland

Some of the Fewterer family moved to Ireland, but this topic is not covered in this excerpt.
Another 43 words (3 lines of text) about their life in Ireland is included in all our PDF Extended History products and printed products wherever possible.

Migration of the Fewterer family

Gradually becoming disenchanted with life in Ireland many of these uprooted families sailed aboard the armada of sailing ships known as the "White Sails" which plied the stormy Atlantic. These overcrowded ships often arrived with only 60 to 70% of their original passenger list, many dying of illness and the elements, were buried at sea. In North America, early immigrants bearing the family name Fewterer, or a spelling variation of the surname include: James Forest, who settled in Virginia in 1654; George Forest settled in Virginia in 1608, 12 years before the "Mayflower"; Toby Forrester settled in Virginia in 1655.