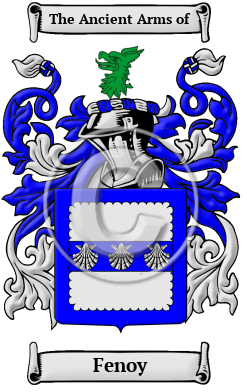 The ancestors of the name Fenoy date back to the Anglo-Saxon tribes of Britain. The name is derived from when the Fenoy family lived near a marsh or swamp. Another name for wetlands is fen, in the Old English fenn, from which this name is derived. [1] There are two place-names that may serve as sources for the name as well: Fen, in Lincolnshire, and Venn, in Devon.

Early Origins of the Fenoy family

The surname Fenoy was first found in Devon, where the family held a family seat from early times. The origins of the name make it likely that several branches of the Fenoy family emerged independently in different areas during the Middle Ages. The earliest known bearer of the name was Godwin de la Fenna, who was recorded in the Pipe Rolls of 1176. [2]

The Hundredorum Rolls of 1273 has two listings: Isabella ate Fenne, Oxfordshire; and Robert de la Fenne, Somerset. [3] In Norfolk, John atte Fen was Bailiff of Yarmouth in 1377 and Thomas Fenn, was similarly bailiff of Yarmouth. [4]

Early History of the Fenoy family

It is only in the last few hundred years that the English language has been standardized. For that reason, early Anglo-Saxon surnames like Fenoy are characterized by many spelling variations. As the English language changed and incorporated elements of other European languages, even literate people changed the spelling of their names. The variations of the name Fenoy include: Fenn, Fenne, Fennoy, Fann, Fan, Venn, Fen and others.

Notables of this surname at this time include: John Venn (1586-1650), English regicide, second son of Simon Venn of Lydiard St. Lawrence, Somerset; Sir Richard Venn or Fenn (died 1639), an English merchant and politician, Lord Mayor of London in 1637; and John Fenn (d. December 1615), an English Roman Catholic priest, writer and Catholic martyr, beatified in 1987. Richard Venn (1691-1740), was an English divine, born at Holbeton, Devonshire, the eldest...
Another 70 words (5 lines of text) are included under the topic Early Fenoy Notables in all our PDF Extended History products and printed products wherever possible.

Migration of the Fenoy family

Many English families tired of political and religious strife left Britain for the new colonies in North America. Although the trip itself offered no relief - conditions on the ships were extremely cramped, and many travelers arrived diseased, starving, and destitute - these immigrants believed the opportunities that awaited them were worth the risks. Once in the colonies, many of the families did indeed prosper and, in turn, made significant contributions to the culture and economies of the growing colonies. An inquiry into the early roots of North American families has revealed a number of immigrants bearing the name Fenoy or a variant listed above: Richard Fenn, who settled in Virginia in 1623; Richard Fenn, who immigrated to New England in 1635; Charles Fann, who came to Maryland in 1663; Joshua Fenn, who arrived in Pennsylvania in 1682.