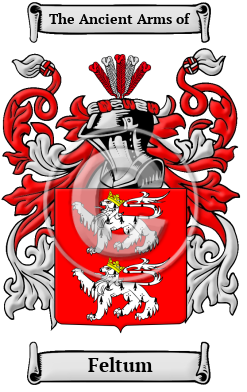 The ancient roots of the Feltum family name are in the Anglo-Saxon culture. The name Feltum comes from when the family lived in Felton, a place-name found in many locations throughout England. There are places named Felton in Herefordshire, Worcestershire, Northumberland, and Shropshire. Further research showed the name was derived from the Old English elements feld, which means field, and tun, which meant enclosure or farm, and later fort or town. It would have translated as "farm or village in open country." [1]

Early Origins of the Feltum family

The surname Feltum was first found in Norfolk where "the village [of Litcham], which is large, consisting of several streets, had formerly a market and some annual fairs, granted by Edward I. to Robert de Felton." [2]

Early History of the Feltum family

One relatively recent invention that did much to standardize English spelling was the printing press. However, before its invention even the most literate people recorded their names according to sound rather than spelling. The spelling variations under which the name Feltum has appeared include Felton, Feltone and others.

Notables of the family at this time include John Felton ( fl. 1430), English divine, Fellow of St. Mary Magdalen College, Oxford, and professor of theology, and 'vicarius Magdalensis Oxonii extra muros.' Blessed John Felton (died 1570) was an English Catholic martyr, executed during the reign of Elizabeth I. He "was descended from an ancient family in Norfolk. He was a gentleman of large property, and resided at Bermondsey Abbey, near Southwark, Surrey. His wife had been maid of honour to Queen Mary, who just before her death recommended her to Queen Elizabeth. Indeed, Elizabeth held her in great respect, for they...
Another 208 words (15 lines of text) are included under the topic Early Feltum Notables in all our PDF Extended History products and printed products wherever possible.

Migration of the Feltum family to Ireland

Some of the Feltum family moved to Ireland, but this topic is not covered in this excerpt.
Another 35 words (2 lines of text) about their life in Ireland is included in all our PDF Extended History products and printed products wherever possible.

Migration of the Feltum family

At this time, the shores of the New World beckoned many English families that felt that the social climate in England was oppressive and lacked opportunity for change. Thousands left England at great expense in ships that were overcrowded and full of disease. A great portion of these settlers never survived the journey and even a greater number arrived sick, starving, and without a penny. The survivors, however, were often greeted with greater opportunity than they could have experienced back home. These English settlers made significant contributions to those colonies that would eventually become the United States and Canada. An examination of early immigration records and passenger ship lists revealed that people bearing the name Feltum arrived in North America very early: Andrew Felton who settled in Virginia in 1651; Benjamin Felton settled in Salem Massachusetts in 1630; John Felton settled in Barbados in 1680 with his wife, children and servants.