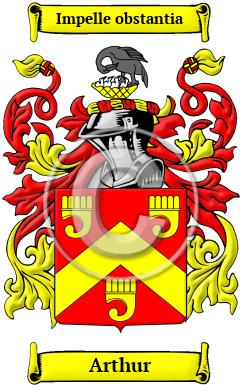 The Dalriadan clans of ancient Scotland spawned the ancestors of the Arthur family. Their name comes from the Celtic personal name Arthur, which is of various and often disputed etymology. The personal name Arthur may be derived from some early cognate of the Gaelic "art" and the Welsh "arth" which means "bear" and may indicate early Celtic worship of that animal or one who has a high regard for that animal's virtuous qualities.

Early Origins of the Arthur family

The surname Arthur was first found in the county of Berwickshire an ancient county of Scotland, presently part of the Scottish Borders Council Area, located in the eastern part of the Borders Region of Scotland, in south eastern Scotland.

In England, the name is thought to have been a "baptismal name as in 'son of Arthur' A rare font-name in the Hundred Rolls. Very common since the battle of Waterloo and the publication of Tennyson's poems." [4]

Early History of the Arthur family

The medieval practice of spelling according to sound and repeated translation between Gaelic and English created many spelling variations of the same name. Arthur has been recorded as Archibure, Arthuwire, Artheor, Arthurs, Arture, Harthawr, Artair, Artuir and many more.

Notable amongst the Clan from early times was Arthur (1486-1502), the eldest son of Henry VII, born at Winchester on 19 Sept. 1486. His mother was Elizabeth of York, the eldest daughter of Edward IV, whom his father, after he obtained the crown, had married in fulfilment of a promise that he had...
Another 53 words (4 lines of text) are included under the topic Early Arthur Notables in all our PDF Extended History products and printed products wherever possible.

Migration of the Arthur family to Ireland

Some of the Arthur family moved to Ireland, but this topic is not covered in this excerpt.
Another 168 words (12 lines of text) about their life in Ireland is included in all our PDF Extended History products and printed products wherever possible.

Arthur migration to the United States +

Descendents of Dalriadan-Scottish families still populate many communities across North America. They are particularly common in Canada, since many went north as United Empire Loyalists at the time of the American War of Independence. Much later, in the late 19th and early 20th centuries, the highland games and Clan societies that now dot North America sprang up, allowing many Scots to recover their lost national heritage. Some of the first immigrants to cross the Atlantic and come to North America bore the name Arthur, or a variant listed above:

Arthur Settlers in United States in the 17th Century

Arthur Settlers in United States in the 18th Century

Arthur Settlers in United States in the 19th Century

Arthur Settlers in Canada in the 18th Century

Arthur Settlers in Canada in the 19th Century

Arthur Settlers in Canada in the 20th Century

Arthur Settlers in Australia in the 19th Century

Arthur Settlers in New Zealand in the 19th Century

Historic Events for the Arthur family +

Suggested Readings for the name Arthur +