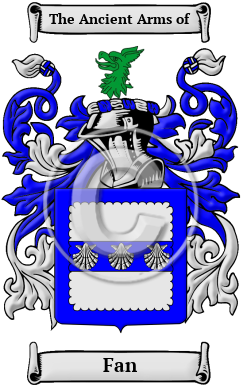 The ancestors of the bearers of the Fan family name are thought have lived in ancient Anglo-Saxon England. They were first found near a marsh or swamp. Another name for wetlands is fen, in the Old English fenn, from which this name is derived. [1] There are two place-names that may serve as sources for the name as well: Fen, in Lincolnshire, and Venn, in Devon.

Early Origins of the Fan family

The surname Fan was first found in Devon, where the family held a family seat from early times. The origins of the name make it likely that several branches of the Fan family emerged independently in different areas during the Middle Ages. The earliest known bearer of the name was Godwin de la Fenna, who was recorded in the Pipe Rolls of 1176. [2]

The Hundredorum Rolls of 1273 has two listings: Isabella ate Fenne, Oxfordshire; and Robert de la Fenne, Somerset. In Norfolk, John atte Fen was Bailiff of Yarmouth in 1377 and Thomas Fenn, was similarly bailiff of Yarmouth. [3]

Early History of the Fan family

Until quite recently, the English language has lacked a definite system of spelling rules. Consequently, Anglo-Saxon surnames are characterized by a multitude of spelling variations. Changes in Anglo-Saxon names were influenced by the evolution of the English language, as it incorporated elements of French, Latin, and other languages. Although Medieval scribes and church officials recorded names as they sounded, so it is common to find one person referred to by several different spellings of his surname, even the most literate people varied the spelling of their own names. Variations of the name Fan include Fenn, Fenne, Fennoy, Fann, Fan, Venn, Fen and others.

Notables of this surname at this time include: John Venn (1586-1650), English regicide, second son of Simon Venn of Lydiard St. Lawrence, Somerset; Sir Richard Venn or Fenn (died 1639), an English merchant and politician, Lord Mayor of London in 1637; and John Fenn (d. December 1615), an English Roman Catholic priest, writer and Catholic martyr, beatified in 1987. Richard Venn (1691-1740), was an English divine, born at Holbeton, Devonshire, the eldest...
Another 70 words (5 lines of text) are included under the topic Early Fan Notables in all our PDF Extended History products and printed products wherever possible.

In the United States, the name Fan is the 9,705th most popular surname with an estimated 2,487 people with that name. [5]

Fan migration to the United States +

Searching for a better life, many English families migrated to British colonies. Unfortunately, the majority of them traveled under extremely harsh conditions: overcrowding on the ships caused the majority of the immigrants to arrive diseased, famished, and destitute from the long journey across the ocean. For those families that arrived safely, modest prosperity was attainable, and many went on to make invaluable contributions to the development of the cultures of the new colonies. Research into the origins of individual families in North America revealed records of the immigration of a number of people bearing the name Fan or a variant listed above:

Fan Settlers in United States in the 17th Century

Fan Settlers in United States in the 18th Century

Fan Settlers in United States in the 19th Century