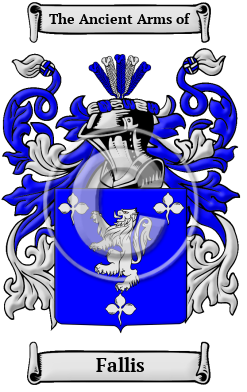 The ancestors of the Fallis family brought their name to England in the wave of migration after the Norman Conquest of 1066. They lived in Midlothian. The name comes from the Old English word fall, which, strangely, could indicate someone who lived near either a waterfall or a meadow. Another derivation suggests that the name is a local reference to the area of Falaise, Normandy. Time has confused the two derivations, and it is now extremely difficult to tell which is appropriate in a given case. [1]

Early Origins of the Fallis family

The surname Fallis was first found in Midlothian where they held a family seat from very early times and were granted lands by Duke William of Normandy, their liege Lord, for their distinguished assistance at the Battle of Hastings in 1066 A.D.

The Falle variant is now native to Jersey in the Channel Islands, but was originally from Lancashire where Gilbert de la Falle was recorded in the Assize Rolls of 1263. William de Fall was listed in the Hundredorum Rolls of 1255 in Oxfordshire and Geoffrey del Falles was found in the Subsidy Rolls of Yorkshire in 1297. [1]

The Fallas or Fallis variant dates back to the Domesday Book of 1086 where it was first recorded by William de Faleise, de Falisia in Wiltshire. [2]

Early History of the Fallis family

Before the last few hundred years the English language had no fixed system of spelling rules. For that reason, spelling variations occurred commonly in Anglo Norman surnames. Over the years, many variations of the name Fallis were recorded, including Falla, Fala, Falle, Falls, Fallows, Fallis and many more.

Outstanding amongst the family at this time was George Fala Scottish Ambassador. Philip Falle (1656-1742) was a clergyman and historian of Jersey. He was born in the parish of St. Saviour in Jersey and was sent to England at a very early...
Another 42 words (3 lines of text) are included under the topic Early Fallis Notables in all our PDF Extended History products and printed products wherever possible.

In the United States, the name Fallis is the 13,069th most popular surname with an estimated 2,487 people with that name. [3]

Fallis migration to the United States +

The unstable environment in England at this time caused numerous families to board ships and leave in search of opportunity and freedom from persecution abroad in places like Ireland, Australia, and particularly the New World. The voyage was extremely difficult, however, and only taken at great expense. The cramped conditions and unsanitary nature of the vessels caused many to arrive diseased and starving, not to mention destitute from the enormous cost. Still opportunity in the emerging nations of Canada and the United States was far greater than at home and many went on to make important contributions to the cultures of their adopted countries. An examination of many early immigration records reveals that people bearing the name Fallis arrived in North America very early:

Fallis Settlers in United States in the 18th Century

Fallis Settlers in United States in the 19th Century

Historic Events for the Fallis family +