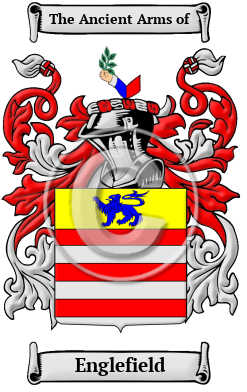 The origins of the Englefield name lie with England's ancient Anglo-Saxon culture. It comes from when the family lived in Englefield, a parish in Berkshire, six miles from Reading. "This parish derives its name from the Saxon word Ingle, a fire or beacon light; and probably had its origin about the middle of the ninth century, when the Danes, having made themselves masters of Reading, sent out a detachment from their army to attack the Saxons, who were encamped here, and who drove them back with great loss. " [1]

Early Origins of the Englefield family

The surname Englefield was first found in Berkshire, at Englefield, a village and civil parish, best known as the site of The Battle of Englefield on 31 December 870 between the Anglo-Saxons, under Æthelwulf, Ealdorman of Berkshire, and the Danes, which resulted in a resounding victory for the Saxons. Englefield House has been the ancestral home of the Englefield family, since the time of King Edgar, Edgar the Peaceful (943-975.)

"The family continued in possession of the estate when Lambarde wrote, temp. Queen Elizabeth. 'It is at this day part of the possessions of a man of that name, whear-by it may appeare that the place som tyme gyveth name to the parson' (person). The Englefields are said to have been proprietors of the lands in the time of Egbert, some years before he became king of all England." [2]

Early feudal rolls provided the king of the time a method of cataloguing holdings for taxation, but today they provide a glimpse into the wide surname spellings in use at that time. William de Englefield was found in the Pipe Rolls for Staffordshire in 1185, Philip de Ingelfeld in Gloucestershire in 1355, and Stephen Ingylfeld was found in registered in 1407. [3]

Early History of the Englefield family

Before the last few hundred years, the English language had no fast system of spelling rules. For that reason, spelling variations are commonly found in early Anglo-Saxon surnames. Over the years, many variations of the name Englefield were recorded, including Englefield, Englefeld, Englesfield and others.

Englefield migration to the United States +

To escape oppression and starvation at that time, many English families left for the "open frontiers" of the New World with all its perceived opportunities. In droves people migrated to the many British colonies, those in North America in particular, paying high rates for passages in cramped, unsafe ships. Although many of the settlers did not make the long passage alive, those who did see the shores of North America perceived great opportunities before them. Many of the families that came from England went on to make essential contributions to the emerging nations of Canada and the United States. Research into various historical records revealed some of first members of the Englefield family emigrate to North America:

Englefield Settlers in United States in the 19th Century

Englefield Settlers in United States in the 20th Century