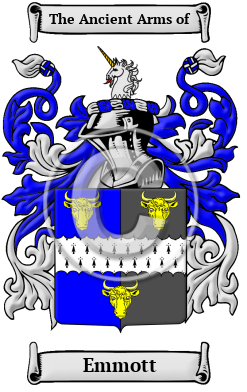 The generations and branches of the Emmott family share a name that has its roots in the ancient Anglo-Saxon culture of Britain. The name Emmott comes from the given name Emma. The surname Emmott is one of the few names in England that derived their name from a female first name. In this case bearers of the surname were referred to as the son of Emma. [1] This surname also has origins in the place-name Emmett (Emmott), which was in Lancashire.

Early Origins of the Emmott family

The surname Emmott was first found in Lancashire near the village of Laneshawbridge, Colne.

Emmott Hall was a country house located there and possibly dates back to the 14th century. It is thought the family lived there possibly as early as the Norman Conquest. We do know that Christopher Emmott (died 1745), a successful London cloth merchant modernised the existing house in 1737 to give it a Georgian appearance and made several extensions. Upon his death, his nephew changed his name to Emmott in order to inherit the estate. In 1939, the hall was used as military barracks but was later left empty and had to be demolished in 1967.

One source goes back further claiming that the family was Norman in origin from Amiot or North Amiota of Normandy, 1195. The Magni Rotuli Scaccarii Normanniae also lists Robert and Roger Amiot 1198. [2]

Early History of the Emmott family

This web page shows only a small excerpt of our Emmott research. Another 152 words (11 lines of text) covering the years 1273, 1379 and 1600 are included under the topic Early Emmott History in all our PDF Extended History products and printed products wherever possible.

Until quite recently, the English language has lacked a definite system of spelling rules. Consequently, Anglo-Saxon surnames are characterized by a multitude of spelling variations. Changes in Anglo-Saxon names were influenced by the evolution of the English language, as it incorporated elements of French, Latin, and other languages. Although Medieval scribes and church officials recorded names as they sounded, so it is common to find one person referred to by several different spellings of his surname, even the most literate people varied the spelling of their own names. Variations of the name Emmott include Emmett, Emmet, Emott, Emmitt, Emetts and others.

More information is included under the topic Early Emmott Notables in all our PDF Extended History products and printed products wherever possible.

Migration of the Emmott family to Ireland

Some of the Emmott family moved to Ireland, but this topic is not covered in this excerpt.
Another 38 words (3 lines of text) about their life in Ireland is included in all our PDF Extended History products and printed products wherever possible.

Migration of the Emmott family

Searching for a better life, many English families migrated to British colonies. Unfortunately, the majority of them traveled under extremely harsh conditions: overcrowding on the ships caused the majority of the immigrants to arrive diseased, famished, and destitute from the long journey across the ocean. For those families that arrived safely, modest prosperity was attainable, and many went on to make invaluable contributions to the development of the cultures of the new colonies. Research into the origins of individual families in North America revealed records of the immigration of a number of people bearing the name Emmott or a variant listed above: John Emmett who landed in Virginia in 1654. Josias Emmett and his family purchased land in Barbados in 1663; and other Emmetts settled mainly in Pennsylvania over the next two hundred years..