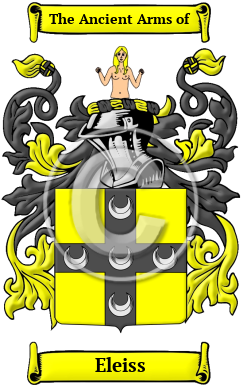 Eleiss is a name that dates far back into the mists of early British history to the days of the Anglo-Saxon tribes. It is derived from the baptismal name for the son of Ellis. which "has for the most part been formed from the scripture name Elias, which does not occur as an Anglo-Saxon name, but which was in use in France as early as the days of Charlemagne, as a baptismal designation, and after wards gave to several families." [1]

Early Origins of the Eleiss family

The surname Eleiss was first found in Yorkshire where the first record of the name was "William Alis, mentioned in the Domesday Book as the progenitor of the Ellises of Kiddal, county York, and Stoneacre, county Kent, from whom sprang Sir Archibald Ellys, a crusader who is said to have originated the cross and crescents so common to the Ellis coat-armour." [1]

Early History of the Eleiss family

It is only in the last few hundred years that the English language has been standardized. For that reason, early Anglo-Saxon surnames like Eleiss are characterized by many spelling variations. As the English language changed and incorporated elements of other European languages, even literate people changed the spelling of their names. The variations of the name Eleiss include: Ellis, Elliss, Ellys, Elis, Eliss, Elliason and many more.

Distinguished members of the family include Thomas Ellis, Mayor of Norwich from 1460 to 1474; Sir Francis Ellis, an administrator of the English East India Company, and President of Bengal in 1693; John Ellis (1598-1665), a Welsh Anglican clergyman and religious writer, born at Gwylan, Maentwrog, Merionethshire; Humphrey Ellis, D.D. (d. 1676), English Catholic divine; Sir William Ellis (1609-1680), an English lawyer, judge...
Another 63 words (4 lines of text) are included under the topic Early Eleiss Notables in all our PDF Extended History products and printed products wherever possible.

Migration of the Eleiss family to Ireland

Some of the Eleiss family moved to Ireland, but this topic is not covered in this excerpt.
Another 172 words (12 lines of text) about their life in Ireland is included in all our PDF Extended History products and printed products wherever possible.

Migration of the Eleiss family

Many English families tired of political and religious strife left Britain for the new colonies in North America. Although the trip itself offered no relief - conditions on the ships were extremely cramped, and many travelers arrived diseased, starving, and destitute - these immigrants believed the opportunities that awaited them were worth the risks. Once in the colonies, many of the families did indeed prosper and, in turn, made significant contributions to the culture and economies of the growing colonies. An inquiry into the early roots of North American families has revealed a number of immigrants bearing the name Eleiss or a variant listed above: David Ellis who settled in Virginia in 1608 12 years before the "Mayflower"; Arthur Ellis, who arrived in Massachusetts in 1630; Elizabeth Ellis, who arrived in Boston in 1635.