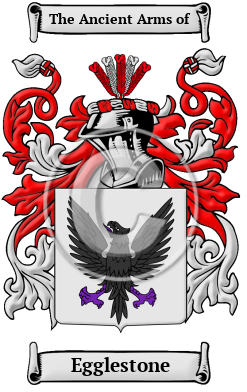 Early Origins of the Egglestone family

Thomas of Eccleston (fl. 1250), was a Franciscan monk who studied at Oxford, and entered the Franciscan order probably soon after its settlement in England. "His work, for which he was collecting materials for twenty-five years, is dedicated to Simon de Esseby; it gives a narrative of some thirty years of the settlement of the Franciscans in England, describing their work and their poverty with the vividness of an eye-witness. " [6]

Early History of the Egglestone family

During the era when a person's name, tribe and posterity was one of his most important possessions, many different spellings were found in the archives examined. Egglestone occurred in many references, and spelling variations of the name found included Eagleton, Eaglestone, Eglestone, Egglestone and many more.

Notable amongst the family name during their early history was William Ecclestone or Egglestone (fl. 1610 - 1623), an English actor in English Renaissance theatre, a member of Shakespeare's company the King's Men. Thomas Eccleston (1659-1743), Jesuit, only son of Henry Eccleston, Esq., of Eccleston Hall, Lancashire, by Eleanor, daughter of Robert Blundell, Esq., of Ince Blundell, was born in 1659. "He was educated in the college of St. Omer, and afterwards continued his studies for two years (1677-1679) in the English College at Rome. During the wars in Ireland, after the revolution of 1688, he held a captain's commission...
Another 98 words (7 lines of text) are included under the topic Early Egglestone Notables in all our PDF Extended History products and printed products wherever possible.

Migration of the Egglestone family to Ireland

Some of the Egglestone family moved to Ireland, but this topic is not covered in this excerpt. More information about their life in Ireland is included in all our PDF Extended History products and printed products wherever possible.

Egglestone migration to the United States +

Gradually becoming disenchanted with life in Ireland many of these uprooted families sailed aboard the armada of sailing ships known as the "White Sails" which plied the stormy Atlantic. These overcrowded ships often arrived with only 60 to 70% of their original passenger list, many dying of illness and the elements, were buried at sea. In North America, early immigrants bearing the family name Egglestone, or a spelling variation of the surname include:

Egglestone Settlers in United States in the 17th Century

Egglestone Settlers in United States in the 19th Century

Egglestone Settlers in United States in the 20th Century

Egglestone Settlers in Australia in the 19th Century