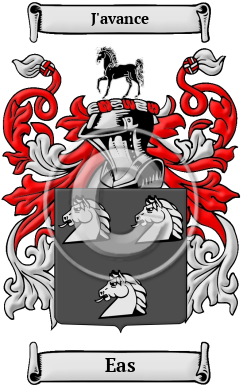 The ancestors of the bearers of the Eas family name are thought have lived in ancient Anglo-Saxon England. They were first found in the area of the town or village that was in the east. The surname originated in the southern counties of Bedfordshire, Oxfordshire, Cambridgeshire, and Essex.

However, another source claims the name could have been Norman in origin as the Magni Rotuli Scaccarii Normanniae list Amelot Best, or D'Est, was from Normandy in 1195. [1]

Early Origins of the Eas family

The surname Eas was first found in Essex where they held a family seat from very early times in the town of Colchester. One of the first records of the name was Amelot Best, or D'Est, in Normandy in 1195. [1] But by the 13th century, the name was scattered throughout Britain with various spellings. The Hunderdorum Rolls of 1273 lists: Robert del Est in Cambridgeshire; Richard Est in Lincolnshire; and Geoffrey Est and Emma ate Estend in Oxfordshire. [2]

There were two baronetcies created for persons with the surname East. The first was for William East of Hall Place who was High Sheriff of Berkshire in 1766. That title became extinct in 1828 with the death of the 2nd Baronet. The second was Edward Hyde East of Calcutta, India in 1823. He was Member of Parliament for Great Bedwyn (1792-1796) and Winchester (1823-1831.) And that title became extinct upon the death of the 2nd Baronet in 1878.

Early History of the Eas family

Until quite recently, the English language has lacked a definite system of spelling rules. Consequently, Anglo-Saxon surnames are characterized by a multitude of spelling variations. Changes in Anglo-Saxon names were influenced by the evolution of the English language, as it incorporated elements of French, Latin, and other languages. Although Medieval scribes and church officials recorded names as they sounded, so it is common to find one person referred to by several different spellings of his surname, even the most literate people varied the spelling of their own names. Variations of the name Eas include East, Easte, Est, Eyst, Eyste and others.

Notables of this surname at this time include: Thomas East (1540?-1608?), the English printer and music publisher who was made a freeman of the Stationers' Company on 6 Dec. 1565. Thomas East (also spelt Est, Este, and Easte) (1540?-1608?), was an English printer specializing in music printing. He is generally supposed to have been...
Another 53 words (4 lines of text) are included under the topic Early Eas Notables in all our PDF Extended History products and printed products wherever possible.

Migration of the Eas family

Searching for a better life, many English families migrated to British colonies. Unfortunately, the majority of them traveled under extremely harsh conditions: overcrowding on the ships caused the majority of the immigrants to arrive diseased, famished, and destitute from the long journey across the ocean. For those families that arrived safely, modest prosperity was attainable, and many went on to make invaluable contributions to the development of the cultures of the new colonies. Research into the origins of individual families in North America revealed records of the immigration of a number of people bearing the name Eas or a variant listed above: Richard East who landed with his family in Virginia in 1623; Francis East settled in Tobago, on one of the southern islands, and Benjamin East landed in Pennsylvania in 1682..