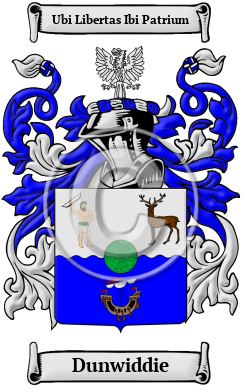 Early Origins of the Dunwiddie family

The surname Dunwiddie was first found in Dumfriesshire at Dinwoodie in the parish of Applegarth [1] where one of the first records of the name was Sir Alan de Dunwidi was listed as seneschal (a royal officer in charge of justice) of Annandale in the first quarter of the thirteenth century. Adam de Dunwidie witnessed a claim of lands (c. 1194-1214.) Years later, Alan Dinwoodie rendered homage in 1296 to King Edward I of England on his brief conquest of Scotland. [2]

Early History of the Dunwiddie family

Notable amongst the family at this time was Robert Dinwiddie (1639-1770), from Glasgow, was Lieutenant Governor of colonial Virginia from 1751 to 1758. Some claim that his actions in trying to protect the French expansion into the Ohio Country, an area held by the Ohio Company, of which he was a stockholder may have precipitated the French and Indian War. In 1753, he sent a young George Washington, aged 21 to warn the French to withdraw from their recently built Fort Presque Isle near Lake Erie. Washington was sent back with a letter to Dinwiddie informing him that he should raise...
Another 100 words (7 lines of text) are included under the topic Early Dunwiddie Notables in all our PDF Extended History products and printed products wherever possible.

Migration of the Dunwiddie family to Ireland

Some of the Dunwiddie family moved to Ireland, but this topic is not covered in this excerpt.
Another 58 words (4 lines of text) about their life in Ireland is included in all our PDF Extended History products and printed products wherever possible.

Dunwiddie Settlers in New Zealand in the 19th Century