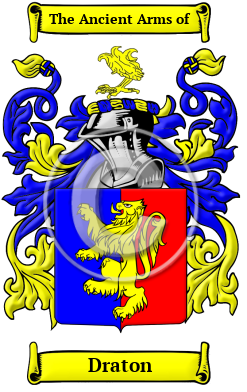 Draton is a name of ancient Anglo-Saxon origin and comes from the family once having lived in one of the many places called Drayton, or in the settlement of Dreyton in Devon. The reason for the multitude of place names is because the place name literally means "farmstead at or near a portage or slope used for dragging down loads," from the Old English words "draeg" + "tun." [1]

Exploring Drayton-in-Hales, or Market-Drayton in Shropshire for a moment, we found "Nennius endeavours to identify this place with the Caer Draithon of the Britons, enumerating it as one of the principal cities belonging to that people; and the correctness of his opinion has not been arraigned by any succeeding writer. It is evident from the discovery of the foundations of several houses in the adjoining fields, that the town anciently occupied a more extended site than it does at present. In the record of Domesday it is mentioned by the name Draitune. The manor was successively in the possession of the abbot of St. Ebrulph, in Normandy, and the abbot of Combermere, in Cheshire." [2]

Early Origins of the Draton family

The surname Draton was first found in the Hundredorum Rolls of 1273 where Matilda de Drayton, Cambridgeshire; and Beatrix He Draytone, Huntingdonshire, were both listed as holding lands that time. A few years later, Richard de Drayton, was listed as bailiff of Yarmouth, Norfolk in 1284. [3]

Early History of the Draton family

Sound was what guided spelling in the essentially pre-literate Middle Ages, so one person's name was often recorded under several variations during a single lifetime. Also, before the advent of the printing press and the first dictionaries, the English language was not standardized. Therefore, spelling variations were common, even among the names of the most literate people. Known variations of the Draton family name include Drayton, Draydon, Draton, Dradon and others.

Notables of the family at this time include Nicholas de Drayton (fl. 1376), English ecclesiastic and judge, appointed warden of King's College, Cambridge, on 1 Dec. 1363, with a salary of fourpence a day, and an allowance of eight marcs per annum for robes. In 1369 he was suspected of heresy, and the Bishop of London was authorised to commit him to prison (20 March). In 1376 he was appointed a Baron of the Exchequer. The date of his death is uncertain. He is commonly described as 'magister.' [5] Michael Drayton (1563-1631), the English poet, was born at Hartshill, near Atherstone, Warwickshire...
Another 121 words (9 lines of text) are included under the topic Early Draton Notables in all our PDF Extended History products and printed products wherever possible.

Draton migration to the United States +

For political, religious, and economic reasons, thousands of English families boarded ships for Ireland, Canada, the America colonies, and many of smaller tropical colonies in the hope of finding better lives abroad. Although the passage on the cramped, dank ships caused many to arrive in the New World diseased and starving, those families that survived the trip often went on to make valuable contributions to those new societies to which they arrived. Early immigrants bearing the Draton surname or a spelling variation of the name include:

Draton Settlers in United States in the 17th Century

Draton Settlers in United States in the 20th Century